How do you feel about sharing your home with a stranger? To some people this is an odd, if not downright scary, idea. How can you know they are not an axe-wielding murderer? Of course you can never be one hundred percent sure, but I think it is fairly unlikely; when I was growing up, we always had lodgers from abroad in our house, and so far I have lived to tell the tale.

With some simple reference checks it need not be risky. Since my children flew the nest, I have been letting out their rooms to the occasional lodger. Often these are friends of friends, and my children’s connections with Spain means that many of them are Spanish. Of course there are financial benefits to renting out a spare room, but people often don’t realise there can be more to having lodgers than just the money.

We discussed good places to have afternoon tea in London and my recommendations went down well. (…) My other favourites are The Goring, The Lanesborough and The Milestone Hotel, but of course we Brits do not go out for tea all the time, especially in view of ‘la crisis’.

My most recent lodger was recommended by a neighbour and during her stay we taught each other a lot about our respective cultures. This went beyond simply learning a few new words of each other’s language: our Gallega was most enthusiastic about all things British and there was not too much complaining about the weather, as coming from Galicia, she was used to the rain.

My assumption that all Spaniards drink coffee was wrong, as she was more of a fan of English afternoon tea. While I introduced her to the peppermint variety, she suggested I try Lady Grey. Who would have thought I would discover a new favourite tea by talking to a Spaniard? I told her about the ‘miffy or tiffy’ debate – tea or milk first? I’m definitely a ‘tiffy’ – milk last. Most importantly, though, I taught her the value of using a proper teapot rather than a teabag in a mug. The pot gives the tea more space to brew and the tea is then at perfect drinking temperature when poured.

We discussed good places to have afternoon tea in London and my recommendations went down well. The National Portrait Gallery scored top marks for the view, but not for the tea; The Wolsely was a hit for the ambience and great service. My other favourites are The Goring, The Lanesborough and The Milestone Hotel, but of course we Brits do not go out for tea all the time, especially in view of ‘la crisis’.

This is why I also wanted to show her how important tea time is at home, an experience far more typical than posh tea in a smart hotel. We invited her to join us at 4 o’clock in front of a roaring fire in the sitting room – just how tea should be served during the dark days of winter.

In my opinion, cream goes first, as it replaces butter and it is easier to spoon jam on top of cream than the other way round.

Although it is a regular event for us, she raved about the experience for days, not least because Rick, my official scone baker and husband, gave her a lesson in how to make the perfect scone. She was surprised by how quick and easy it was. We introduced her to Delia Smith, the creator of our favourite recipe, explaining her prominence in British culinary history. Delia’s Cookery Course was published alongside a TV series in 1978 and shaped a generation of young cooks, teaching them how to make traditional British meals from scratch. I advised her that scones should always be made and eaten fresh and never microwaved, as it makes them go spongy, although they can be toasted a few days after they are made if there are any left over. Size is also important. Too small and there is not enough of the inside, too big and they are difficult to handle – plus you don’t have room for cake! 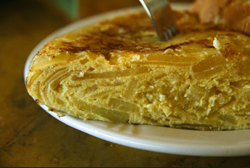 Our homemade scones were of course served with cream and jam, and we told our guest about the ongoing debate over in which order they should be spread. In my opinion, cream goes first, as it replaces butter and it is easier to spoon jam on top of cream than the other way round. I was proud to tell her that I had made the jam myself, from blackcurrants I had grown at my allotment. That meant two new Spanish words for me (grosella negra and huerta) and three new discoveries for her: how many different berries there are, how delicious they can be and that Londoners can grow their own food in urban space.

In return we discovered how to make the perfect tortilla. She made it clear that, yes, you really do need to use a frying pan full of oil, which is a bit frightening when you aren’t used to it. I had made tortilla many times before but never managed not to over-cook it, for fear of it falling to pieces. She taught me that making tortilla is like a religion: the tortilla pan is sacred, and should never be used for anything else.

In return we discovered how to make the perfect tortilla. She made it clear that, yes, you really do need to use a frying pan full of oil, which is a bit frightening when you aren’t used to it.

I also learnt that every family has their own method. She explained that her mother used to add courgette (calabacín – another new word for me) to incorporate more vegetable into the dish, and would peel it first so that no-one noticed. I was amazed to watch her cook so calmly, as I have always found it incredibly stressful to deal with such a large quantity of hot olive oil, not to mention the trauma of tossing the tortilla. Yet she cooked and chatted as if she was making an everyday recipe, which she was, whereas I have only braved the trials of cooking tortilla for very special occasions. This perfect ability to cook and talk meant that I also learnt the origin of the tortilla francesa. Apparently, during the French occupation of Spain in 1808, the French used up all the potatoes, so the Spanish had to make do with tortilla cooked with other vegetables.

So, I have finally overcome my fear of making tortilla, and our guest has mastered the art of scones. By renting my spare room out to a lodger, I gained more than just a little extra income. In turn, she got more than just a place to sleep. We made the most of being thrown together by coincidence, mutual friends and economic circumstance. I don’t think I would have someone to stay in my house for free. It isn’t always easy to have a stranger in the house, so the financial gain is important. But it is always satisfying when a practical arrangement can also be a fun and enriching experience. This time I learnt a lot about Spain and Spanish culture. Who knows what the next lodger will teach me?

I am a Londoner born and bred, and have worked in education for over 30 years. I am currently studying a course on the history of the City of London. I am discovering many new and exciting things about the city and I love it! My first visit to Spain was when I was 16 and did a Spanish exchange in Madrid and Segovia. I was hooked by the language, food, culture and the weather - and I still am!