Marco Godoy at ARCO2018. Fiction as an Instrument of Power

‘Straight lines don’t exist in the natural world.’ This is the opening line of ‘The Distance Between Us’, one of the videos by Marco Godoy on display at London’s Copperfield Gallery. BritEs caught up with the artist, originally from Madrid, during this year’s ARCO contemporary art fair. 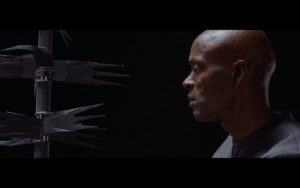 ‘The distance between us’ © Marco Godoy , HD video 6’24” / Image courtesy of Copperfield

No natural frontiers are straight, from flowing rivers to the skin that acts as a barrier between ourselves and the rest of the world. The lines that we use to measure distance are nothing more than human inventions.

Marco Godoy’s work calls into question the reality of those intangible distances that we create. How significant is the difference between the highest and the lowest salary, between what I believe and what you believe? How significant are the borders between nations, those imagined lines between countries which are ultimately made into real fences, from 3 metres to 3 kilometres, superimposed onto a landscape where they don’t belong.

“We need to ask ourselves how borders are brought into being, both physical frontiers and their architecture and more intangible borders: social, economic and religious”, Godoy tells us.

An arbitrary line drawn onto a map becomes a tangle of wires. And Marco Godoy converts this in turn into a sculpture (Ornaments) consisting of thorny trees so straight that they could only be manmade.

And this fabrication, itself all too real, is the most effective tool of those in power. Just as Foucault’s panopticon inspires terror out of our fear of being watched, these borders are nothing more than a prop or symbol which compel us to obedience, instil in us a sensation of order and, ultimately, numb us. 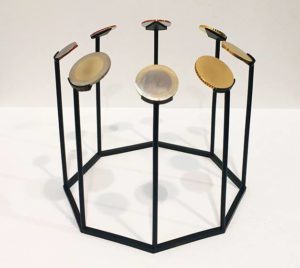 In ‘The Fiction of Power’, the Madrid-based artist uses sculpture and image to represent the Stone of Destiny. The stone was traditionally used during the coronation of Scottish monarchs, until it was taken by England’s King Edward I in 1296. It was then used in English coronation ceremonies until its return to Scotland in 1996. The stone has acquired a powerful symbolic value, becoming an emblem of domination and servitude. The victor and the vanquished represented in an object as simple as a rock.

How, then, to destroy this fiction? With visual measures that serve to destabilise this symbolism. In Devaluing an Image, Godoy rubs several coins with a piece of sandpaper. The image of power fades and acquires an entirely different meaning. Godoy uses the same process as his adversaries to distort the original purpose of the object.

After 5 years in London, the artist has returned to Madrid.

“I need time and space, and in London that is very difficult to find. Creativity shouldn’t be subject to these constraints, you should instead be able to expand these limits in order to create whatever you want. You have to find a midway point between where you can find knowledge and the cities in which you’re able to work.”

Perhaps his return also has something to do with those instruments of power, those fictional boundaries, that he explores in his work. Brexit, another recently created division, combined with the rising cost of living in London and the resurgence of a racism often disguised by fake politeness, is broadening these distances: subtle divisions which continue to perpetuate hierarchies. We can only hope that Godoy keeps converting these separations into art so that they remain in the public eye. This may be our only way of breaking them apart.

Ana is a Galician who worked for five years in the CGAC (Galician Centre of Contemporary Art) and has contributed with several art magazines. In 2010 she moved to Edinburgh where she is studing a master's degree in Contemporary Art and has also curated many exhibitions. Since 2013 she manages the gallery Interview Room 11 in colaboration with Mirja Koponen and she promotes intensely Spanish artist in the capital city of Scotland.

Matt Calderwood, Stephanie Mann and Josep Maynou explore the aesthetics and humour found within states of imminent collapse at ‘If I do nothing, nothing does’