London Dramas: When is this suffering gonna end?

I tend to think stupid things at night. Sometimes they’re so ridiculous that I can’t stop myself laughing out loud. It’s serious, I’m a head case. I live in London, and so it’s in this city that I sleep. In a double bed, too much of a double, so much so that it causes confusion. Especially for me. Take last night, when I greeted the person that wasn’t there, and yet who could have been. “Hello, my love,” I said.


I tend to think stupid things at night. Sometimes they’re so ridiculous that I can’t stop myself laughing out loud. It’s serious, I’m a head case. I live in London, and so it’s in this city that I sleep. In a double bed, too much of a double, so much so that it causes confusion. Especially for me. Take last night, when I greeted the person that wasn’t there, and yet who could have been. “Hello, my love,” I said.

I changed into my pyjamas and once under the duvet (it would be factually inaccurate to talk about blankets) I felt the need to hear someone else crying. I concentrated: that is, I closed my eyes, clenched my fists and wished with all of my heart to hear a moan, a sob or a wail. I thought of Africa, since they say that there are plenty of sad people there. I want to hear their pain, I thought. But instead of connecting with a sad child and their flies, the image that came to me was of the faces – the white faces – of the delegates at the conference on democratic processes in Africa that I had attended last week in Goodge Street. 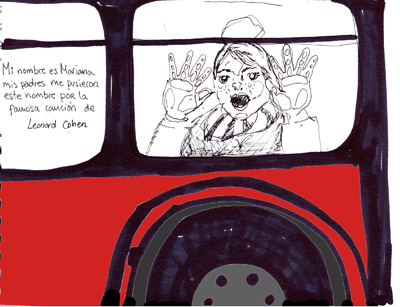 Why don’t you cry? I asked the empty half of my double bed. The next day, like the previous, I returned home on the bus. I saw a dead dog in the middle of Oxford Street. You could see its nose in that pool of skin and insides. Cry now, I thought. But it wasn’t possible. It wasn’t that I didn’t want to, but more of a practical problem. No-one would come and console me, and that awful feeling would convert the death of the dog into something trivial. I didn’t want to steal its limelight.

I thought of stupid things again that night. I remembered the hands of my best friend, well, my former best friend. He used to put great care into stubbing out his fag ends, flattening them against the bottom of the ashtray like the car had crushed that poor devil of a dog into the tarmac. Fag butts or dogs, they all end up the same. That’s one comforting thought at least: sadness hasn’t sapped my poetic vision or my sense of humour, however anodyne they may be.

I carry on thinking about me, always me. It’s an illness, and I call it Solitude. Hopefully it’ll turn into an epidemic.

I’m now brushing my hair, as my mother taught me so many years ago. A few hairs fall to the floor, along with a handful of recent memories. London memories. I had a kind of best friend here too. He was Algerian, and I liked him a little. I developed a crush on him because he was kind to me. Stupid, really, wasn’t it? He invited me for a cappuccino on the first day that I cried in this city. My manager had yelled at me because I’d committed the fatal error of charging for a cheesecake instead of a chocolate cake. No-one had screamed at me like that since my father had told me off for falling off my bike after he’d forbidden me from riding it without him there. I was, and I am, weak. And I don’t know whose fault it is, but I know that I’m guilty of something that I was unaware of. In London, weakness is a crime. They lock you up for being weak. I’m exaggerating, obviously, but no more so than the person who bawls at you for mischarging a bloody cake on your third day at work.

And, well, I would’ve gone to Algeria with him. I mean the guy who made the cappuccino for me. He was the only person who let me cry that day. I wonder if someone heard me.

And now it’s night again, and I am in bed. I ask myself, “Which is more humiliating: not to dare to cry because no-one will be there to console you, or to cry because your boss makes a fool out of you?” I don’t answer. I don’t need to. 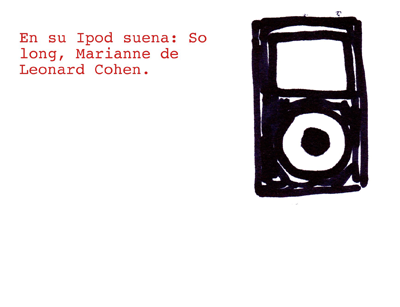 Now I work in a pub. They treat me better there. Especially the drunks. My best friend, well, my former best friend, drank a lot. Maybe that’s why I get on so well with the alcoholics. They’re weak, like me. I’m sure they come to the bar because there’s no-one at home to ease their pain. I listen to them and I serve them what they ask for. I do it with the greatest of delicacy, and with love. My colleagues don’t realise, and neither does my boss. But I think one of these days, one of these drunkards will be truly grateful and then I’ll be able to cry on his shoulder, because he’ll feel obliged to comfort me.

It’s still night, and here I am, in my double bed. What really makes me sad is the English girls dressed for summer when it’s freezing cold here. I think it’s them who are truly suffering. It’s as hair-raising as thinking of yourself as sensitive when actually you’re just weak.

I don’t know what I’m doing in this city. I want to die, but without being dead. I suppose that if I could decide my own future, I’d quite like to spend a long time playing hopscotch, like we did in the school playground as kids.

I tend to think stupid things at night. Sometimes they’re so ridiculous that I can’t stop myself laughing out loud. It’s serious, I’m a head case.

My name is Ámbar and according to numerology I am a number five: “the number of restlessness and action. A symbol of freedom, adaptability, of an adventurous and wandering spirit, but also of inconsistency and overindulgence of the senses.” I can tell you even more myself, like how I always have cold feet and how I’m crazy about dogs. Soup and cheese (of any variety) make me happy, together with a good book and a lot of coffee to get me through the morning. I have a varied academic background but suffice to say that I come from the field of humanities and I am passionate about languages and literature. I am a hardened nostalgic, and people often call me a softie or even a sissy. My objective in life is to have a comfortable sofa on which to watch good films in good company.

Spain is a land for Christmas