For those unfamiliar with Ricardo Cavolo´s, work, it could be summarised as an illustration of the opium fuelled fantasies of a Russian sailor recently returned from an arduous voyage around the world.

His imagined landscape is peopled by stories of the lower class neighbourhoods of early 19th Century Moscow, and is told through hand-inked tattoos of romantic assassins. Keys appear within these drawings which open space-time rifts in which Frida and Diego swear their eternal love beneath the burning gaze of the Eye that Sees Everything.

The Brighton-based artist works tirelessly, and when he is not in his studio trying to stay on top of his endless queue of commissions he can be found travelling the world for exhibitions, conferences and private jobs.

It seems I am not the only one to find his semiotics strangely familiar, and I discover that Instagram is already overrun with the hashtag #yosoycavolista. Lo

His influences are clear to those who look for them; vintage tattoo art, tropicalism, the Lowbrow art movement, Russian folklore, religious iconography, the Freemason aesthetic, pre-Columbian mysticism, pagan rituals…

I’m sure I’ve forgotten something, and so I wanted to ask you in person: What are your influences?
You’re spot on so far! I’ll make you a list, including those you’ve mentioned and with some additions: 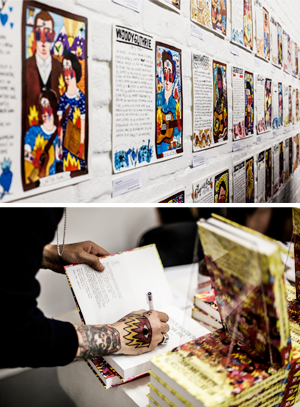 At the end of the day, anything which comes with its own recognisable symbolism.

Are these symbols only important due to their aesthetic role in your work, or do you use them to create a narrative?
All symbolism corresponds to a message, to a particular script. Obviously, the elements have to work visually. But the story takes precedence over the aesthetics and defines the work. I don’t want a graphic creation which is only enjoyable on a visual level. I’m interested in the message, the mechanisms which force the viewer to think and to construct a narrative. A writer takes this for granted, as they are liberated from visual distraction. But because I can’t write, and only draw, I have to try to recreate this system through symbolism.

I’ve seen on Instagram that the hashtag #yosoycavolista is becoming more and more popular. Does Cavolism exist?
Oh, no no no. It happens because of the people who love me and it’s a way of showing support. But no!

Walls, cavasses, art toys, tattoos, clothes: it seems that every possible surface has been “Cavolised”. Do you simply move from project to project as they come to you, or is there a master plan for world domination?  I take projects as they come. My only “masterplan” is to carry on earning a living like this, which is easier said than done. And variety is something that I need in my work, so that I can stay switched on and interested. This means that working with such a range of media really suits me. What’s more, every surface has its own personality and science (or art!) and I enjoy having to think up a strategy for working in each format.

I love the idea of working with someone you can’t control or restrain. That’s when the most interesting and honest results come about.

After attending the launch your book ‘101 artists to listen to before you die I know that music is very important to you, but in what ways has it influenced your work? I don’t think that music has had a huge influence on my work. Without a doubt it has an impact on my mood and my energy levels. For me, music is a sort of drug or potion that, depending on what I take, affects me in different ways as and when I need it. In short, what I listen to does have an impact on my work, but indirectly. What I hear affects my mood on a given day, and so I’ll produce such and such a thing.

I read somewhere that you were born in your father’s painting studio. Is this true or mere myth?
I was born in the Santisima Trinidad Hospital in Salamanca. But my parents’ house was also my father’s studio. I was only away from there during the three days I spent in hospital. While I was in my mother’s belly I lived in the studio and after I emerged I went back to the studio. So I myself say that I was born in the studio, but mainly as a poetic way of showing that I have lived in a workshop my whole life.

Did you always know that this was what you wanted to do? I didn’t know how it was going to emerge, nor in what form, but I knew from the word go that I was going to do something connected to drawing. I never had that moment of doubt, of “what the hell am I doing with my life”. But I never really thought that I would fulfil my dream of doing what I want and, above all, make a living of it.

In the book  “101”  there is quite a moving picture of you as a child drawing alongside your father. What have you learnt, artistically, from him? Artistically, he has taught me everything I know. Obviously I have created my own world. Bu he was my maestro, at the same time as being my father, and that meant that the lessons I learnt were three times as important and special. He helped me grow m wings, and so when I tried to fly it was much easier. 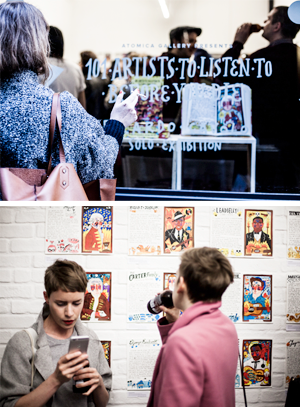 What does he think about your success? I think that it has made him the happiest person in the world. I think he’s even happier than me in this respect. So I try to tell him detail of my professional life, because they’re victories that we can both relish, and this makes it all thousand times more delicious.

Have you ever envisaged working together on a project?
In all truthfulness, no. Often, these types of collaboration try to establish a special bond. My father and I already have this connection. But, let’s be honest, I am not completely rejecting the idea that we might someday do something together. He is now a drawing teacher and is less productive at a personal level. But I’m sure that at some point we will work together.

With which other artists would you like to collaborate? With whom do you feel an affinity?
I feel affinity with and admiration for the artists of the Outsider movement. And they’re the ones with whom I’d most like to work in the future. With them and with children. I love the idea of working with someone you can’t control or restrain. That’s when the most interesting and honest results come about.

What projects do you have for the future?
I don’t have many definite jobs lined up yet. I know for sure that in September I’ll start a new book and that, like the one about the musicians, it will be 100% my own work, text and illustrations. It’s a book that I can’t tell you much about yet, but it’s a dream that I have been planning to fulfil for nearly ten years. Also it’s 99% certain that I’ll do a new comic. And I also have a Los Angeles exhibition lined up for 2016.

And why Brighton?
I wanted to leave Spain for a while. England has always really interested me. But London was a challenge for me, and after living in Madrid I wanted somewhere smaller and quieter, not to mention cheaper, than London. Brighton ticked all the boxes, as well as having the sea, a nearby airport and being only an hour from London. As soon as I arrived I knew that I’d made the right choice. Brighton had everything that I needed. Now I’m already leaving England, but I’ve spent two very interesting years on these shores.

it’s very hard to reconcile football with art at the moment. It seems that someone from the creative or artistic spheres can’t like football, and vice versa.

Where are you going, and what do you expect from your new destination?
Well, I know that Barcelona is going to offer a lot. But I also haven’t made any concrete plans. My move there has come about quite organically. I’ve really been missing the light, it’s not the same here in the UK. I’m someone who needs the sun, and who works by daylight, and here in England I’ve missed that. I’m a bit like a plant. And now my body is begging me for somewhere with light and sunshine, if at all possible. I come from Salamanca, but in Brighton I have grown attached to the sea and now I need it. I know that all these requirements, which are as tied to my body as to my profession, will greatly benefit my everyday work.

And well, there’s football too, surely? I saw on your website that you’ve done something for El Barça. Football players appear in your work as much as musicians. Are you a big fan?
I consider myself a supporter rather than a fan. I enjoy football, true enough. And to be honest, it’s very hard to reconcile football with art at the moment. It seems that someone from the creative or artistic spheres can’t like football, and vice versa. This is a harmful conception, and one which is still very deep rooted. Football is also a show of expression, creativity, strategy and passion. And it has nearly as many negative tendencies as the ostentation of art. The mural project for El Barça had a huge effect on me, and now I’m loyal to the end!

Sales Director (London) & Writer. When he was eight years old, his father brought him back a gift from a trip to Canada: a tape with all of the current chart hits on it. Amongst them was "I Feel Love" by Donna Summer and after that nothing was the same again! He has lost two record collections in his life, the most recent of which was ruined in a flood in his friend's basement in Homerton. He is a music fan but is not completely obsessed; he manages to keep his melomania at a level that allows him to live a normal life. We hope you enjoy reading his articles.