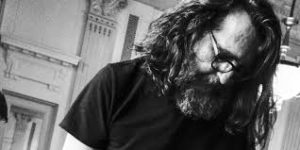 Suso Sáiz is an avant-garde musician, composer and producer; the reference of electronic music in Spain is an imaginative and subtle guitar, creator of unmistakable “hypnotics”.

His tireless activity covers a broad spectrum of music and other disciplines, where the interrelation with the plastic arts and poetry occupy a prominent place.

Wolfgang Voigt, born in 1961 in Cologne, Germany, is an artist, music producer, label owner and one of the co-founders of the Cologne-based electronica and techno label Kompakt.

Beatrice Dillon is an artist, musician and DJ based in London UK. Like Laurel she will be writing a brand new live ambient set specifically for MODE 2019

Ellen Arkbro (b. 1990, Stockholm) is a composer and sound-artist primarily working with intervallic harmony in just intonation.

Over the past decade, Tomoko Sauvage (JP/FR) has been working on “natural synthesizer” of her invention – waterbowls – combining water, ceramics and hydrophones (underwater microphones).

Oliver Coates is a cellist, electronic producer and composer from the UK. His live performances centre on amplified cello interacting with computer environments for sound processing, triggering dub delays, distortions and synth patterns underneath long-limbed and smooth-bowed melodies to submerge the listener.

Suso Sáiz is an avant-garde musician, composer and producer; the reference of electronic music in Spain is an imaginative and subtle guitar, creator of unmistakable “hypnotics”.

Headquartered in Stockholm, Kali Malone is an American composer and musician who creates sonic monoliths that tug at the very material of listening. Via analog and digital synthesis – and within compositional frameworks that utilize unique tunings and psycho-acoustic phenomena – Malone’s dark minimalism maintains a certain gravity, even as the ground shifts.

John Also Bennett is an American composer, flautist and synthesist based in Brooklyn, New York. He is a member of the trio Forma and founding member of the duo Seabat, as well as composing and performing solo under his own name.

Doc’n Roll, the UK’s Music Documentary Festival, returns to London for its 6th London edition from 1st to 17th November 2019

The UK’s first and only annual Festival of...

Jazzoleá brings to London the spirit of Andalusia...