Art on the Move by Lorenzo Hernandez: Maria Camahort, guitarist

I chose María to be part of Art On The Move for her unquestionable talent as a guitarist, which she displays in a number of ways. The first time we met was during a concert she was giving with soprano Laura Ruhi-Vidal.


I chose María to be part of Art On The Move for her unquestionable talent as a guitarist, which she displays in a number of ways. The first time we met was during a concert she was giving with soprano Laura Ruhi-Vidal. The venue, The Forge in Camden Town, couldn’t be more interesting: a restaurant with sliding wooden panels that open to show a small concert hall. The architectural beauty of the place made it perfect for a photo shoot. 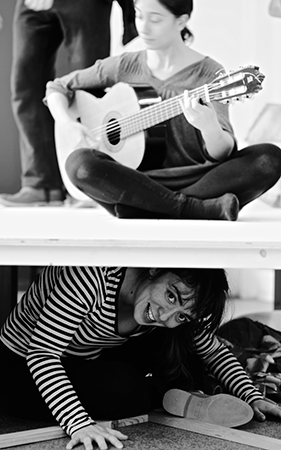 We agreed to take the photos at the end, so I took the opportunity to study Maria’s movements and gestures, especially the way she interacted with her beloved guitar. I also appreciated the sweetness in her gaze, as if she were dreaming while playing. I decided to combine these two elements in her portrait.

After the shoot, she offered to help me find more artists for the project. A few days later she suggested meeting at Jackson Lane Theatre for the rehearsal of Little Soldier’s production of Don Quixote. Maria was the author of the music score, which she performed on stage, as if she were another member of the cast. The glamorous Maria of The Forge had become a playful pixie who contributed to create the mischievous atmosphere of this delirious version of one of the most famous masterpieces of Spanish literature.

Maria’s relationship with London was love at first sight. In 2007 she decided to leave her hometown, Barcelona, and pursue a master’s degree abroad. She was not sure about where to go, she just knew that she wanted to find a place at least as big as Barcelona. The auditions in London happened to be earlier than in the rest of Europe. She arrived in December, loved the place, was accepted at the Guildhall School of Music and Drama, and the rest is history. She decided not to apply anywhere else.

The beginnings were hard, as the guitar tradition in the UK is not as strong as in Spain, but little by little she has found her place. Today she has her own quintet and they have recently published the album Iberian Colours. It’s thanks to Art On The Move that Maria and I have become friends. She has offered to play with violinist Lucia Veintimilla during the exhibition’s opening and I really look forward to seeing my photos surrounded by the magic of their music.

(The exposition Art On The Move. A Portrait Of 50 Spanish Artists Based in London by Lorenzo Hernandez will take place at the 12 Star Gallery, Europe House, 12 Smith Square, London SW 1P 3EU, from 17 to 26 February 2016)