Documentary cinema is returning to Scotland with the second instalment of Iberodocs, the Ibero-American Documentary Film Festival. The festival aims to foster intercultural integration and to encourage audiences to reflect upon the concept of identity. And judging from this year’s programme, all manner of individual and collective identities will feature upon the screens of the Filmhouse in Edinburgh and the Centre for Contemporary Arts in Glasgow from May 14th to 24th.

The label of ‘Novo Cinema Galego’ should certainly serve a unifying purpose, creating a space within which filmmakers defending their own unique and highly personal style of cinema can meet and come together. It should open up new possibilities and provoke questions rather than shutting itself off from the wider world of film.

In addition to the inevitable list of films originally in Portuguese or Spanish, this year’s festival features a particular ‘Focus on Galicia’, a special selection of short and feature length pieces, all of them made in Galicia and belonging to the cultural phenomenon of ‘Novo Cinema Galego’. This year’s programme incorporates three full-length films(Arraianos (2012) by Eloy Enciso, Vikingland (2011) by Xurxo Chirro and N-VI (2012) by Pela del Álamo), and four further short pieces: Spaces of Time #1 – Vigo, and Spaces of Time #2 – Porto, by David Hernández, Montaña en Sombra by Lois Patiño and Pettring by Eloy Domínguez Serén.

Beli Martínez will act as the representative of ‘Novo Cinema Galego’ for audiences in Edinburgh. A native Galician, her passion for documentary cinema dates back to her time at university: “I had to produce a piece of work for my final assessment, and decided to make a documentary (which, I might add, was a disaster).” The experience, which formed part of her studies of Audiovisual Communication, opened up for her a “medium within which you could enquire, question and make your own films without having a wealth of resources at your fingertips. It was an art form that allowed you to dedicate your own time to investigation, to do things which you couldn’t imagine doing with a fictional film.’

Upon beginning her doctoral studies, she decided to investigate the nascent ‘Novo Cinema Galego’ movement. Today she shares her enthusiasm with students of the ‘Theory and Method of Documentary Making and Film Production’ at the University of Vigo. “I like teaching, I really enjoy giving classes” she says.

We talk to her before she travels to Scotland, and our first question seems immediately obvious:

How would you define ‘Novo Cinema Galego’?
It isn’t a ‘movement’ or a ‘school’, because the starting points and intentions of the filmmakers vary enormously. It should really be seen as a heading that groups together a number of filmmakers and serves a useful commercial purpose. In theory it’s a type of ‘unindustrial, unconventional, undefinable, uncommercialised’ cinema, but the reality is that I see many of the films of the Novo Cinema Galego movement to be, in their own way, just as industrial and commercialised as many films that we usually consider to be so, if not more.

I also believe that the title should look to bring together people with the same preoccupations and concerns. It shouldn’t therefore be defined by certain fixed characteristics, as might be the case if one were to claim that it incorporated only documentaries, but should instead incorporate a wide variety of pieces.

The label of ‘Novo Cinema Galego’ should certainly serve a unifying purpose, creating a space within which filmmakers defending their own unique and highly personal style of cinema can meet and come together. It should open up new possibilities and provoke questions rather than shutting itself off from the wider world of film.

Cinema is yet another form of Galician culture and, as such, it falls to us to create our own narrative, to elaborate upon and develop the image of ourselves that we want to be portrayed through film.

Arraianos and Vikingland are two highly personal feature length films which transport the viewer to the blurred line between reality and fiction. What was it that made you decide to get involved in both films?
I ended up working on Vikingland as a result of my friendship with Xurxo (Chirro, the director). We both come from the same village, A Guarda. I started working with him at Filminho (The Festival of Galician and Portuguese Cinema) and he mentioned that he had found some old VHS tapes and asked whether I could convert them over to a digital format. My involvement in the project developed from there: I saw the images and obviously found some of them fascinating. Xurxo later tried to get a number of production teams interested in the film, but it was rejected, so we had no other option than to put our best foot forward and use what we had, which was, above all, the desire to make the film a success.

Arraianos was a bit of a coincidence. I started working on it thanks to José Manuel Sande, whom I met at Filminho and who asked me if I would be interested in producing the film. I’d already started teaching, which gave me the freedom to work on projects like Vikingland and Arraianos, so I didn’t think twice about saying yes. Sometimes things end up happening completely by chance, but I always think that we seek out these ‘chances’ to an extent, and that things couldn’t really have happened any other way.

Arraianos takes place in a village on the border between Portugal and Galicia which seems somehow to exist on the edge of time, and in which the neighbouring villages also feature. Vikingland, by contrast, tells a story that was stumbled upon by a director when he unearthed a few VHS tapes. The former was filmed using only a vague rough-draft of a script whilst the latter freely adapts the story of Moby Dick over the course of 11 chapters. 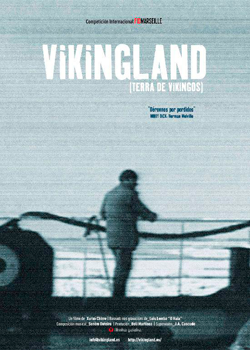 Were there similarities between the films in terms of the production process?
It was a very different process: Arraianos took a long time to film (4 years in fact) whilst Vikingland wasn’t directly filmed so much as assembled from a series of images that we had come across.

There were some similarities though: in both cases we came up with a unique production process that was much more flexible than that of a conventional film, for example. In both films, the time taken from the conception of the idea to completing work on the finished product was extremely long, and the production work itself was a lot more flexible and open than would usually ne the case. We can therefore say that the process of producing the film in many ways colours the films itself, and can ultimately be detected in the finished piece of work.

In these two films, as in others I have worked on, the producer is not merely a ‘follower’ but rather an individual who becomes greatly involved in the project, with the result that they too contribute to the artistic fibre of the film, even though they didn’t originally write it. A consistent presence throughout the period of working on both films is also crucial. When it comes to films made with a limited technical team and budget (we had no budget at all for Vikingland), it’s imperative to see the film through from start to finish. Working with a film over the entirety of its creation takes an incredibly long time, as I’ve said before. It’s important for someone to be there with the director as the film moves through each progressive stage.

Do you see initiatives such as Iberodocs as helping to defeat cultural stereotypes?
On the surface, Galicia is the gaita (an instrument similar to the bagpipes), the tambourine, we are our language, the sea and the mountains, the towns and cities. We are a range of people, some of whom still live here, some of whom left for North and South America, Europe and the Canary Islands. But I believe that the programme of Iberodocs helps to counteract these stereotypes and to reveal a much more complex reality that differs completely from the provincial or regional image that has been depicted in cinema for so long and which some films still perpetuate to this day.
The past few years have been extremely important in making clear that cinema is yet another form of Galician culture and, as such, it falls to us to create our own narrative, to elaborate upon and develop the image of ourselves that we want to be portrayed through film.

What would you say to potential audience members in Edinburgh in order to encourage them to attend the ‘Focus on Galicia’?
I’d say that it’s a great opportunity to learn more about a culture which I believe will resonate with Scottish audiences, as well as to discover Galicia, along with the current crop of filmmakers who are contributing to the revival of our country’s cinema as a whole. For me, cinema holds no greater joy than the discovery of new languages, new perspectives, new artists and cultures, and I think that this is a great opportunity to do just that.