Brit Es’s team, led by Carolina Núñez Roca and Vanesa Cejudo, created an event where the food menu was used as a schedule to introduce the artist’s conversations.

“We firmly believe that by promoting the work of Spanish artists to an international public, we are promoting intercultural dialogue and encouraging tolerant societies, a particularly important endeavor these days. For us, the Cross Culture is directly linked to freedom of artistic expression.”

The guest had the opportunity to talk and connect with four fabulous artists: Rosana Antolí, Gracjana Rejmer-Canovas, Ernesto Cánovas, and Pablo A. Padilla Jargstorf. 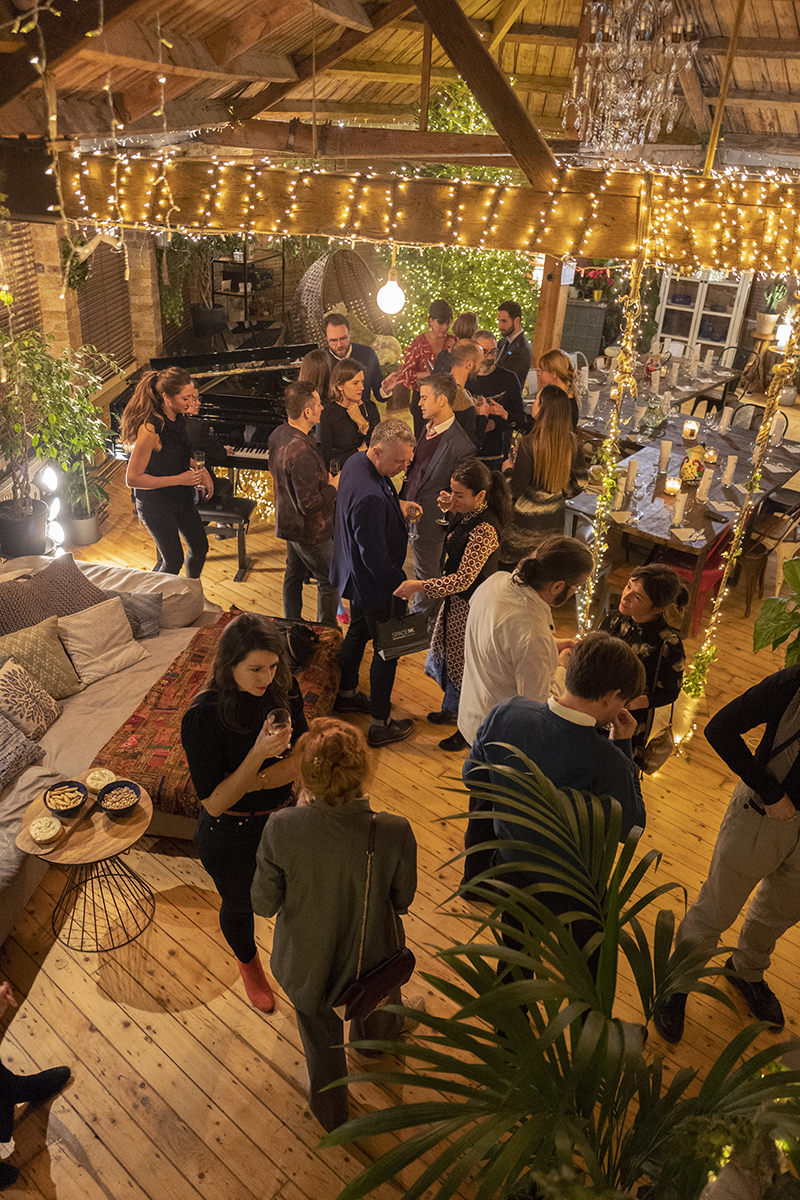 Antonio Sierra, a chef from Extremadura (Spain) and a member of the Brit Es team, designed a secret menu, inspired by the work of the other artists. A Spanish dinner served slowly giving the guests the chance to sit back and relax; to take their time to listen and talk to the artists without feeling rushed.

The evening began with a welcome cava at the time pianist Sam Peña played the piano. Then Vanesa Cejudo introduced Rosana Antolí, a multidisciplinary artist who focuses on two fundamental concepts in her work: the gesture and the loop as elements from which to extract political, social and philosophical meanings. Rosana introduced her practice, inviting attendees to repeat in a loop, for a minute, the gesture they had made most during the first half-hour of the Supper Club.

After this action, while the first course was served as Spanish tapas and pintxos, Antolí presented a video screening with some of the most relevant works in the last years. Such as her latest exhibition at the Tate Modern; her first works introducing the loop and the movement concept; or how she revels the choreographies that structure our daily lives and its multiple readings in transcendental aspects for humanity and life in society.

Then the attendees sat around the table to start a conversation with the couple formed by Ernesto Cánovas and Gracjana Rejmer-Cánovas, who collaborate under the name of Suspicious Minds. Carolina Núñez led a relaxed talk about the common work of both artists, who have already exhibited in different places such as London, Barcelona, Munich, Berlin, Amsterdam or New York.

Ernesto works on the social imaginary and his stories are visually linked to cinema, music, and politics. Gracjana does an artistic intervention using a coloristic chromatic range and material textures, adding other reading to the work. They are a perfect combo to make the public contemplate, reflect and interact with/in their proposals. 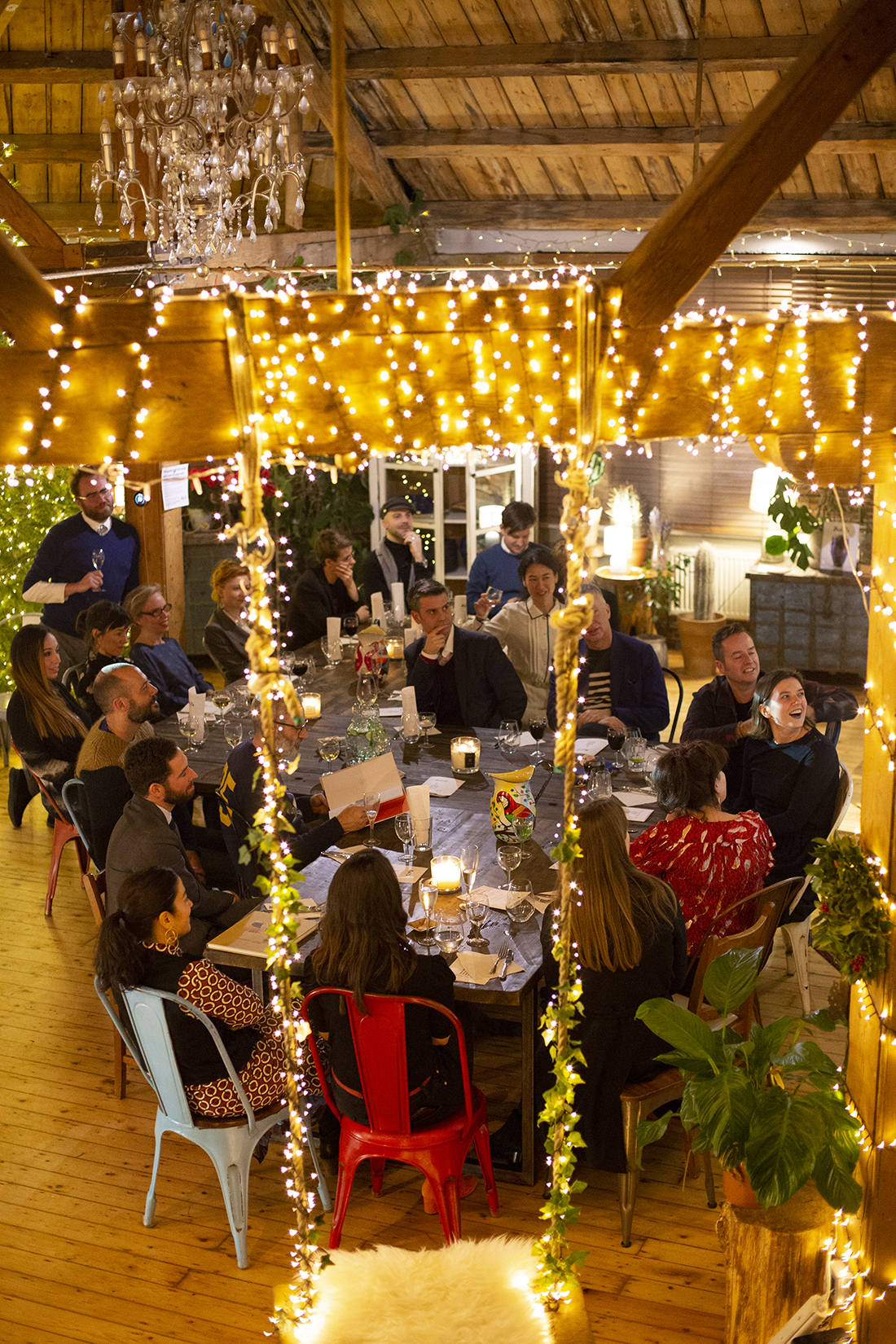 Simón Quintero, a curator from Halcyon Gallery in Mayfair, Ernesto Cánovas’s representative, actively participated in the conversation explaining some of the images that were projected. He also emphasized the professionalism and the work carried out by Brit Es, spreading the work of Spanish artists in the United Kingdom during the last six years.

After this, Chef Antonio Sierra approached the table to talk with each of the guests about the food and the dish they were tasting: Iberian pork cheeks with dark chocolate sauce. Sierra highlighted the variety and gastronomic richness of Spain and presented the Spanish wines of the evening.

Following this, Antonio introduced, through the desert, to Pablo A. Padilla Jargstorf, who created a bespoke piece of art for the Supper Club: three sound landscapes made from the sound obtained when cooking or handle different foods. Three very abstract and powerful scenes created as three dishes in which it was impossible to identify the original source. Three extreme and unrecognizable sound landscapes, which gradually melted and took you to the original scene: the sound of the cava when it is served; the sound obtained when a croquette is fried or when you are smearing jam on a cracker.

Pablo, an architect, sound artist, and composer spoke during the dessert, about how he works exploring the world through sensory distortion, and how concepts such as space, sound or everyday life can interact with each other, making them imperceptible tangible.

The event was kindly sponsored by the Office for Cultural and Scientific Affairs of the Spanish Embassy; Bodega Soul; La Forja Restaurant and with the collaboration of the Shoreditch Treehouse.