My love affair with the independent publisher, Impedimenta

My love affair began in 2007. It’s one of those literary love stories, not because it mirrors those that appear in books but because it’s about the relationship between books and a reader. More specifically, between an independent publisher and myself.


My love affair began in 2007. It’s one of those literary love stories, not because it mirrors those that appear in books but because it’s about the relationship between books and a reader. More specifically, between an independent publisher and myself.

While I adore reading generally, I am especially in love with English literature. Those who are lucky enough to read in English can appreciate the nuances of Dickens, understand a joke in the author’s original language, feel confident and admiring in the face of linguistic acrobatics or the particular way that an emotion is expressed. For the majority of Spaniards who are cursed by that genetic defect that prevents us from speaking or understanding English well, but who nevertheless love English literature, there are fortunately publishers as classic as Alianza Editorial or Anagrama, and others younger but equally well-established, like Impedimenta.

Impedimenta is the sort of publishing house that is founded with the objective and belief that literature and reading can change the world. The editor, Enrique Redel, has a clear vision, declaring: ‘A classic is a work that influences others.’ And Impedimenta publishes classics, modern classics that could end up exercising a great influence – only time will tell – on the work of other authors, and on the reading of future generations.

Redel defines his profession as absolutely vocational. He is, without a doubt, a true book maker, of beautiful, high quality editions in which the translation is a fundamental part of the creative process. But let’s not forget, the merit of a translation is in its imperceptibility. Footnotes? The bare minimum. Their presence reminds us that there is someone behind the page, between us and the original text. The translator cannot be so invisible that his name does not appear next to the author’s, in the space that so deserves to be on the cover, but his greatest achievement is to make his presence go unnoticed, to advance stealthily with us through the narrative without us even realising he exists.

Impedimenta’s undeniable interest in English culture has led it to launch authors like Stella Gibbons and Penelope Fitzgerald, and to consolidate the careers of others like Elizabeth Bowen, Eudora Welty and Edith Wharton. Not to mention its inclusion of indisputable classics like Dickens (‘To Be Read at Dusk’) or Edward Bulwer-Lytton (‘The House and the Brain’) which offer us tales of ghosts and enchanted houses, in the purest of English styles.

Readers of Impedimenta books will almost never find well known titles or great milestones of the international literary canon, but we will stumble across gems considered indispensable by the publisher. A large part of the appeal of an independent publisher resides in that unique element of discovery which leads us to await each new title with excitement.

Every book published by Impedimenta has received a joyful seal of approval from its readers. The most acclaimed title has been the indisputable bestseller ‘The Daughter of Robert Poste’, published in March 2010, which is now on its twentieth edition. The work is considered ‘the most perfect comic novel of twentieth-century English literature’ and is one of the most British books published by Impedimenta. Its launch was described as an ‘English Frenzy’.

Impedimenta book launches are organised literary soirées in which the editor, translator, bookseller and invited guests exchange opinions in a relaxed atmosphere, most recently at the launch of Edmund Crispin’s novel ‘Love Lies Bleeding’, accompanied by authentic English bitter, chips with vinegar and ‘genuine Yorkshire pickles’. The protagonist of this crime saga, Inspector Gervase Fen, has a habit of exclaiming ‘By my rabbit’s feet!’ at the most critical moments of the plot, just like the White Rabbit does in ‘Alice’s Adventures in Wonderland’. And Flora Poste, Stella Gibbons’ heroine, makes herself a cup of tea in her very own china teapot when she needs to take some time out. So is Impedimenta a publisher for lovers of English beer, Yorkshire pickles and tea? 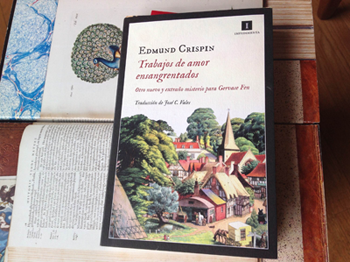 A committed Anglophile and a master of subtlety and detail, the editor of Impedimenta is first and foremost a compulsive reader who loves to recommend the books he most enjoys. In the early days, as he went about weighed down by books, he dubbed the heavy volumes his ‘impediment’ in reference to the burden carried by Roman soldiers when they went to war, which contained their essential survival kit. He has never considered books as a burden, but he does see them as a substantial cultural legacy which we carry with us as we move forwards in life. We cannot pretend that culture is a flimsy thing: it is deep and unique, the reference point of our western tradition. Thus the name of the Impedimenta publishing house was born.

As the editor himself has commented, ‘books are a complicated vice’, not easily overcome by sufferers. No doubt the success of Impedimenta resides in the editor’s energy, talent and professionalism, and in his well-judged decision to surround himself with a team of experts who preside over each process of the construction of a book.

It is impossible to tear yourself away from Impedimenta books, not just because they are not the sort you read and then discard, but because the editions have a unique beauty. Impedimenta’s aim was to make books that people would want to own and to keep, and they have more than achieved that. For them, it is not just a question of publishing good storytelling, but a desire that the reader feel a connection with the book, that they fall in love with it. That they be able to touch the pages and the laid paper of the back cover, to smell the ink, and to enjoy a fluid reading experience thanks to the elegant layout and evocative typography.

The translator cannot be so invisible that his name does not appear next to the author’s, in the space that so deserves to be on the cover, but his greatest achievement is to make his presence go unnoticed, to advance stealthily with us through the narrative without us even realising he exists.”

On opening the book you discover a title page which seems to be alive: the undulating red graphic details on the inside swirl as if a gentle breeze had swept into the black and ivory of the background.  You feel as though your copy exists only because it has been made exclusively for you. The editor’s inner designer and illustrator are apparent behind every cover and every new creative design. He himself defines the moment when you open the cover as ‘the best moment of the production of the book.’

There is bond of love between the reader and the book which extends to a relationship between the editor and the loyal reader, the disciple who buys every book hot off the press, enchanted and held captive by this source of wonderful books, who is up to date on every new edition, who religiously watches the Book Trailers uploaded on the publisher’s website as if it were a case of sneaking a preview of the last episode of their favourite series – trailers which, along with the downloadable PDF of the first chapter, sate our ardent curiosity.

For me, the best moment is in the bookshop when you arrive and ask after an Impedimenta book. The way the bookseller’s face changes is unmissable, as is the way they lead you with certain ceremony to the bookshelf or the table where the asked-after copy sits. And as it’s not just any old book, the bookseller won’t try to show you anything else. It’s astonishing, that understanding, that complicity that the editor has cultivated with the bookseller, and which translates inevitably to the reader. In 2008 the Impedimenta publishing house was recognised by the well-deserved National Prize for the Best Independent Publisher, as part of the Contexto Association of independent publishers. Through their mission to feed their passion for books and inspire others to feel the same, Impedimenta have managed to reach a readership and revenues which until then had only ever been achieved by much more established publishers.

The graphic novel occupies an important place amongst Impedimenta’s publications, and the star of the collection is ‘The Yellow Boy’, a name which pays homage to the comic strip character Yellow Kid, created in 1894 by Outcault.

The house has just published ‘The Life and Opinions of Tristram Shandy, Gentleman’, by Martin Rowson, which looks at Laurence Stern’s novel, whilst amongst the forthcoming releases we can look forward to is ‘The Phantom of the Opera and Huck Finn’ by Olivia Vieweg, which is set to coincide with the 160th anniversary of the publication of Mark Twain’s novel. These books, along with those already published in the collection, are representative of the literary and stylistic leanings of the main line of titles which, for us readers, is by no means disappointing.

There is nothing casual about the relationship I am conducting. I desire very strongly that things work out; I am eager to share, to get excited about each new text translated and edited, to live literature like a discovery that never ceases to fascinate. I have a feeling that this love is going to last.

Writer and Literary Critic. She has a degree in Hipanic Studies from the "Universidad Autónoma de Madrid". During two years she cataloged the poet Jorge Guillén manuscripst at the National Library of Madrid working with the academic D. Claudio Guillén. Elsa is a Spanish teacher, works as editor and proofreader for differents publications and agencies in Spain. Short Story Award at Binéfar (Huesca) in 2009 and finalist in the XXVII Ana María Matute de Relato Award (2015).

Legends of Fire by Seth Insua