The party started out as a session of good, and somewhat gay, Spanish music for a small audience made up mostly of Spanish gay men and lesbians living in the capital. But the music started attracting more and more people, mostly Spaniards, who then brought their British friends with them and others from all over the world.


We promised Alejandro Asencio that this would be the title of the article, and so it is. Alejandro, with the help of Noelia and, more recently, another Alejandro, are the organisers of what has become London’s longest-running Spanish fiesta.

“It all started in Soho in a bar where Noelia and I were working, but the party has now been running for nine years,” Alejandro tells me. He was working there as a DJ, having worked in a thousand other places before that, just like all Spaniards who come to London.

Since 2005 this native of Elche (Alicante) has been livening up a few nights of the year for the Spaniards of London with the help of Spanish music, mostly electro.

In 2008, they moved to the east of London on account of the growing number of people who were coming to the event. And since 2010 they have had to charge an entry fee to be able to fund it.

“It all started in Soho in a bar where Noelia and I were working, but the party has now been running for nine years”.

The party started out as a session of good, and somewhat gay, Spanish music for a small audience made up mostly of Spanish gay men and lesbians living in the capital. But the music started attracting more and more people, mostly Spaniards, who then brought their British friends with them and others from all over the world.

“People of all nationalities come along: English, Polish, Irish, Australian. An English guy once came up to me and asked me to play Mecano,” Alejandro tells me with a tone of pride rather than surprise.

I ask him if he thinks the party is a good way of promoting Spanish pop. He replies that this is not the point of the fiesta. The event looks to provide its audience, who are mostly gay Spaniards in London, with somewhere to listen to music which doesn’t really get played anywhere else, but he emphasises that everyone is welcome and that if it helps to promote Spanish pop music, then so much the better.

Each night has a different theme and the venue is always decorated spectacularly in keeping with the theme chosen and kept top-secret by Noelia and the two Alejandros, who only reveal what it is a few days before the night itself. People arrive in fancy dress, ready to have a good time. 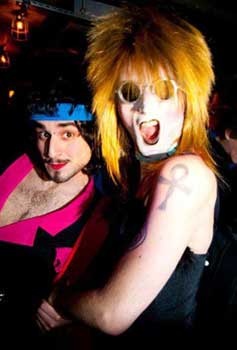 But it doesn’t stop there. For some years now, the nights have not been short of live performances from Spanish bands. These heirs to the greatest electropop that the 80s – and the 2000s revival – had to offer meet up in London every two months, bringing along their catchy lyrics and rhythms to bring the night to life. Putilatex and Putirecords are just two of the bands who have already played at Pelucas y Tacones to the delight of a very Brit Es audience who may well savour the cultural advantages of finding themselves in the capital of European pop, but by no means shy away from Spain’s most alternative electroclash bands. Not so long ago, the organisers and attendees enjoyed a particularly exciting evening; Alaska and Mario Vaquerizo, two classic artists so often played at the parties, turned up unexpectedly, to everyone’s delight.

With all the preparation and organisation that goes into these nights, we asked Alejandro about his plans for the future. “The nights will keep taking place in London once every two months but we also want to reimport it to Spain” he says with a mischievous grin. “The night that we organised in León was unexpectedly crazy.”

Clearly Pelucas y Tacones is going from strength to strength and with their expertise, although not everyone is drawn to this type of music or event, we hope that more and more Brits find that it’s their cup of tea as they discover more about Spanish music.

See you there soon!

Editor Advisor & Writer. A man of letters who, after taking courses in journalism, archaeology, linguistics, translation amongst other things, and being very experienced in the art of gastronomy and of communication has thrown himself into his work at the stove. Humanism is his most wholesome recipe!