Christmas, like childhood, is burdened by the melancholy that comes from knowing that it must eventually come to an end. But this melancholy is something that we only recognise as adults. No child feels it as they stand before the glow of the Christmas tree lights or listen to children’s carols. To feel it, you need to grow up, you need to lose someone and to realise that Santa doesn’t really exist. Although perhaps they can sense it somehow: my only unhappy memory of Christmas as a child is of thinking about the day we would have to take down the tree. A natural pessimist, I started the countdown on Christmas Day itself and the following day the three wise men met their tragic fate. Brit Es Magazine está creada por gente que vive fuera de su ciudad; algunos vuelven siempre a casa por estas fechas y algunos otros lo celebramos con las familias que nos hemos inventado en el camino.

But my grandparents’ house was never quite as beautiful as it was when the plastic tree was taken out of the store cupboard where it was hidden away for the rest of the year, with its lights that gave off an almost imperceptible sound: a buzzing that was present all day, yet which you only noticed once it had stopped. Darkness always came accompanied by an unexpected silence. 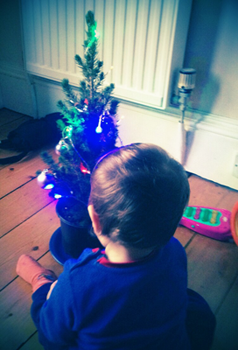 It’s been four years since I last went home for Christmas. We’re a small family, and no one really likes getting together just because we feel we ought to. My grandparents struggle to stay awake beyond 9pm, and the whole business of singing carols stopped being exciting after my cousins grew up. Christmas, for me, becomes almost meaningless if there aren’t children around to enjoy it. In spite of all this, of the fact that I’ve stepped away a little from the festivities, that I see them more as an excuse to go shopping than anything else, the night of Christmas Eve will always be different somehow. It’s not that I wish I were there with my family, but I don’t like them being so far away either. All I really want is for the whole thing to be done with quickly, for February to arrive so that I can once again be in my grandparents’ wooden kitchen, no tree on display and no unwelcome melancholy weighing upon us, because we’re already nostalgic enough without the help of sad songs.

Brit Es magazine is intended for those who live far from home. Some of you return there at this time of year, and others amongst us celebrate with the families we’ve built for ourselves along the way. Whatever the case, whether or not this time of year means something to us, it’s best to be surrounded by people for that inevitable moment of weakness, brought on by a photo on Whatsapp or a phone call, when we need someone there to remind us that February isn’t really so far away.

In any case, for me this year will be different. We have a small tree that we’ll plant in Arthur Seat when January rolls around, a little tree covered in lights, because now there’s a little one scampering about the house, still too young to believe in the three wise men but captivated nonetheless by each little bulb as it brightens and fades. Maybe things really do go full circle, and the carols might yet mean something to me once again.