Somewhere by the River Thames: Don Quijote in London

Photo by David Ruiz
This month, the Spanish theatre production company, Ron Lalá, took its new performance ‘Somewhere in the Quijote’ to the Riverside Studios on the banks of the Thames in Hammersmith as part of the second Festival of Spanish Theatre in London. The festival was initiated last year by Mariví Rodríguez Quiñones, University lecturer of Spanish at King’s College, with the aim of promoting Spanish theatre in the UK.

The play is an innovative adaption of Cervantes’ much celebrated novel, The Ingenious Gentleman Don Quijote of La Mancha. The adventures of Don Quijote have been the subject of spin offs and adaptations since the very beginning: in 1614 a certain Don Avellaneda craftily cut in and published a spurious edition of the Second Part of the novel, cashing in on the fame and fortune of an outraged Don Cervantes’ before the true author could publish his sequel. What has followed is hundreds of years of borrowing, re-working and adapting in forms as diverse as literature, ballet and film.

The spectator’s experience was completely immersive.

So what is to be gained, if anything, by adapting a novel that is considered so magnificent, so perfect and so invincible, that it has become a doyen of Spanish, even global, literature? Do the dynamics of the dramatic genre bring something new and worthwhile to this long established and much loved story? And can a non-Spanish speaking audience appreciate the linguistic richness and cultural nuance of the tale?

The trick is surely in conveying the essence (if there is one) rather than the plot. As the actors explained in the footnote to their performance – a sung disclaimer at the end of the play – five actors cannot represent a whole 126 chapters’ worth of characters and escapades in ninety minutes. Yet the humour, sadness, zaniness and complexity of the original text were superbly delivered by the unfaltering skill and energy of the cast.

The spectator’s experience was completely immersive. The set was arranged such that Cervantes’ writing desk was visible towards the back, while the action of the novel took place mid-stage, with both don Quijote and Sancho Panza venturing into the audience at times to shake hands with the potential voters of Sancho’s island, and to confuse an unsuspecting lady with don Quijote’s idealised love interest, Dulcinea. As a result, the cliché of ‘bringing the Quijote to life’ and making him ‘step off the page’ acquired a new, more concrete dimension as he moved from the space of his creator, to his own space of fictional adventures, to the real space of the audience, blurring the lines between them. 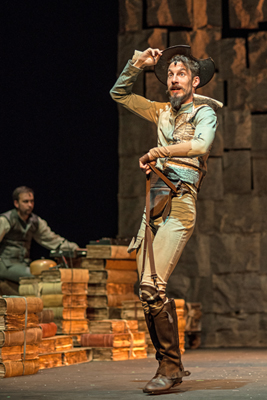 The dazzling use of light, projected onto the stage in concentrated white beams, added an intensely visual element to the play as well as certain sense of magic. Make what you will of the fact that this light was often used in conjunction with the reading of books. The beams were put to clever use to powerfully highlight the parallels between the character of don Quijote and his creator. Standing side by side, each a prisoner and each fiercely illuminated, their speech converged, synchronised, diverged and overlapped. The interplay between creator and creation, reality and fiction, was affectionately and humorously portrayed at other points in the play. When don Quijote thinks aloud his developing fancies, the voice of Cervantes pre-empts that of the knight, literally putting ideas into his head.

The music was superb. It was as skilful as it was entertaining, but it also contributed one very important feature of Spanish-ness that one cannot derive from a page: volume. Thus the chaos and creativity of the story was enhanced, while the melodies, instruments and sentiments of the lyrics had an undeniably Spanish character. An all-male cast was perhaps a surprising choice given that – unlike in Shakespeare’s England – there were in fact female actors on the stage in Cervantes’ Spain. It was, however, a successful move; the spectacle of the scholar, priest and Cervantes himself donning women’s clothes to interpret female roles within the story reinforced the themes of playing, identity and delusion which run throughout the novel.

Non-Spanish speakers were able to follow the action by means of surtitles which were only out of sync with the dialogue once or twice in the whole ninety minutes. The audience seemed predominantly Spanish, however, and there were undoubtedly certain puns and proverbs which would have been more fully appreciated by the speed and cultural memory of a Spanish ear. Nevertheless, non-native Spanish speakers and English speakers alike also enjoyed the play thanks to its energy and all-round immersion. One English-speaking audience member commented: ‘it was visual, fast moving, funny, and perfectly timed. The music was incredible. I was engaged from start to finish.’

One English-speaking audience member commented: ‘it was visual, fast moving, funny, and perfectly timed. The music was incredible. I was engaged from start to finish.

And so to the ending: a set of footnotes which act as a disclaimer, which would usually go at the beginning. Perhaps even the most entertaining aspect of the play – or at least a brilliant climax to a stellar show – the footnotes were an original musical composition essentially advising any quibbling spectator to go home and read the book. It seemed fitting to end on a brand new note, which celebrated and defended the new creation whilst reminding us of the beauty of the original.

A continuation indeed, but also a self-contained masterpiece of its own: stuck for an opening line for his story, Cervantes and his friends put their heads together as the play draws to a close, to try and think up a way to begin. Ironically, it is not the creator but Sancho, the creation, who comes up with the answer and inspires the three friends to leave the stage proclaiming that much repeated line: En un lugar de la Mancha, de cuyo nombre no quiero acordarme, no ha mucho tiempo que vivía un hidalgo de los de lanza en astillero…

London born-and-bred, Freya's passion for languages led her to study French and Spanish at Oxford University where she directed and acted in plays and wrote for her college magazine. During her studies she spent a year teaching English in Valencia and exploring Spanish culture; the highlight was Las Fallas with its buñuelos, verbenas and castillos. As well as being a linguist, Freya is a keen musician, artist and swing-dancer.

All the World’s a Stage: Jorge de Juan and the biggest Spanish theatre project outside Spain

“Translation” By Seth Insua / Chapter I