Mannequins, people, objects: all of them are given the same importance in MANIfashion. The dreamy eyes of the mannequins trigger our imagination in the same way as the sensuous women in Hernandez’s fashion shoots or the tomatoes confronting each other in one of his still lives. All of them are seen by the same eyes, the piercing eyes of Lorenzo Hernandez.


Alongside his portrait work, Lorenzo Hernandez (Tenerife,1959) has always had a very close relationship with fashion photography. As opposed to the first, in which the goal is to reveal the model’s inner self, fashion allows him to give free rein to his creativity and pay homage to two of his biggest influences: jazz and classic films. In Manifashion he did not want to make just a compilation of his work with models and costumes; he wanted to include his long walks in London observing the ever-changing shop windows and those small moments when after a coffee he takes his camera and photographs anything that catches his eye: a leaf, a stone, or a flower.

There is a stark contrast between the fascination the cold beauty of the London mannequins inspires in Lorenzo Hernandez and his concept of fashion as something essentially dynamic. His models are intensely alive and there is always an element of movement, even in the most static shots: a flying necklace, a scarf floating in the wind, a model caught mid-air. There is always a context, a source of inspiration at the core of each session: in Gnouma by Car it’s the great ladies of jazz, in Cabaret Betsabé, the transgressing spirit of the Weimar Republic, and in Foxy Ladies, the heroines of Blaxploitation movies. 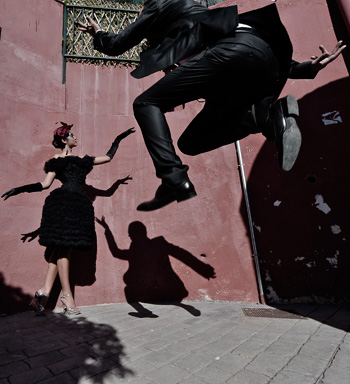 The women in his photographs are powerful, formidable; they are masters of their destinies, no matter their age. On the other hand, his male models, with the exception of Chilicote Blues, are mere puppets at their service, and sometimes we can almost perceive the strings that pull their limbs. It’s interesting to notice that the only free man in his work is alone in the middle of nature. The name Chilicote was borrowed from a prison in Ohio because the leitmotiv of this work is the sense of liberation.

Another element that makes this work unique is the fact that he never works on studio. He has a limitless capacity to transmute locations at will: museums, restaurants, houses in ruins, abandoned depots, even the town hall offices in La Orotava (Tenerife) become the perfect backdrop for his stories. And what is most amazing, the only tool he uses to carry out this tremendous transformation is his camera, without any type of digital retouching. Even those who are present during the shootings find it hard to recognize the places.

Like the runaway in Chilicote Blues, Lorenzo likes going solo. He is producer, prop stylist, set designer, wardrobe stylist and costumer. He even works hand in hand with the makeup artist and hair stylist. Once an idea comes into his mind, he cannot rest until he makes it real. He often works with young new designers because they are open-minded and flexible. As for the models, he often chooses non-professionals since his concept of beauty is highly personal: an irregular and distinctive feature is more valuable than a perfect one.

Mannequins, people, objects: all of them are given the same importance in MANIfashion. The dreamy eyes of the mannequins trigger our imagination in the same way as the sensuous women in Hernandez’s fashion shoots or the tomatoes confronting each other in one of his still lives. All of them are seen by the same eyes, the piercing eyes of Lorenzo Hernandez.

MANIfashion is Hernandez’s second project in London after LONDONvista,  published by Aurora Boreal® in September 2014. He is currently working on an exhibition and book of portraits of 50 Spanish artists based in London, Arte en Movimiento (Art On The Move), and a book of portraits of Latin-American writers.

Next 17th of February we will have the opportunity to see the exhibition and book Arte en Movimiento/Art on the Move by Hernandez at 12 Start Gallery in London. This exhibition captures the pivotal moment the Spanish art scene in London is currently going through, as well-established artists are being joined by a great number of newcomers seeking to progress in their respective careers and contribute to the cultural melting pot that defines this city. Dates: 17 – 26 February 2016. We will keep you updated about it!

‘Frida Kahlo: Making Her Self Up’, the exhibition exploring...

‘Human’, an exploration of the human being at...

‘Balenciaga: Shaping Fashion’ at V&A, the work and...

Noela Roibas’ Work at the 10th edition of...