‘Art on the move’ by Lorenzo Hernandez: Jesus Montero, film director and writer

‘Art on the move’ by Lorenzo Hernandez
Jesus Montero, film director and writer

When I began to work on ‘Art On The Move‘ in October 2014, my goal was to portray the richness of the Spanish artistic scene in London from an intimate point of view. I wanted to show the artists in their work environment, often in solitude, focused on a project that would see the light perhaps months or even years later. This journey has taken me not only to studios, kitchens, theatres, art galleries, and concert halls; the artists have opened their souls for me with unexpected generosity. 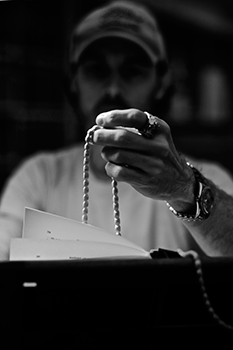 One of the most enriching experiences of the last months has been my encounter with director and writer Jesus Montero, who has worked for BBC, Channel 4, Discovery Channel, Animal Planet, and National Geographic. When I explained that I wanted to photograph him in the place where he got his inspiration, he immediately suggested the Rare Books & Music Reading Room in the British Library. This place was especially meaningful because he is involved in a long research project, which will be the basis of a drama series on the fall of the Mexica Empire.

Having the British Library open half an hour earlier just for you is pure luxury, especially if you have a guide like Jesus, an artist full of contagious passion for his work. He is a man of rituals: he always sits at desk number 353, wearing his Nat Geo cap to isolate himself from the world around him.

Whenever I take a portrait, the first thing I do is to identify a physical feature that defines the model. In the case of Jesus it was clear: his bony hands holding the colourful reading beads he uses to mark the pages of the ancient books. 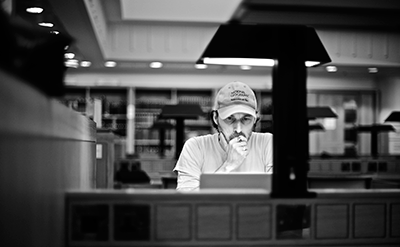 After the shoot we went for a coffee in a nearby terrace in King’s Cross and I enjoyed a relaxed and meaningful conversation with Jesus, a man full of wisdom and humility at the same time. He told me about his project on the Mexica Empire with engaging passion, challenging all the preconceptions I had on the topic. Then he moved on to talk about his experience with the meerkats in the Kalahari Desert. These little mammals taught him, among other things, the importance of teamwork.

When I asked Jesus about his reason for choosing London as his home, he told me about a three-part article that his colleagues in National Geographic had published some time ago*: a feature on three cities equally extraordinary in their own time; each of them cosmopolitan centres that revolutionized the world with their advances in all kinds of fields: Alexandria, New York and… Cordoba. Jesus was born in the latter and he always wanted to live in a city in the vanguard, a city where he could enjoy what Cordoba offered when it was the centre of the Western world. London is his twenty-first century Cordoba.

Photo and text by Lorenzo Hernandez

Lorenzo Hernandez’s exhibition Art On The Move. A Portrait Of 50 Spanish Artists Based in London will be shown at the 12 Star Gallery, Europe House, 12 Smith Square, London SW 1P 3EU, from 17 to 26 February 2016)