She speaks discomfort with real boldness and fluency. Her career-summarising exhibition at the Tate is the mouthpiece for this language, and it makes us listen.

Unease is a powerful language. The things that make us feel uncomfortable, which disconcert or threaten us… that’s the stuff that talks to us. And I think Mona Hatoum has this language down. She speaks discomfort with real boldness and fluency. Her career-summarising exhibition at the Tate is the mouthpiece for this language, and it makes us listen… 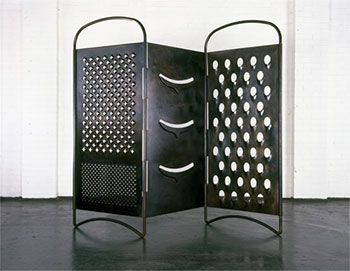 You speak the languages you’re exposed to and for Mona Hatoum, discomfort must be one of them. Her family had to flee Palestine for Lebanon, she then had to flee Lebanon for London. DISORIENTATION, DISPLACEMENT, INTRUSION… these are the key themes which jump out from her manic scrawlings and performance notes which accompany each piece. These are all dialects of discomfort which she clearly identifies with and seeks to instil in each of her carefully constructed concepts.

‘Don’t smile… you’re on camera’ (1980) and ‘Corps étranger’ (1994) deal explicitly with this (surveillance, intrusion, exposure etc.). ‘Don’t smile’ features footage of people in a room, with Mona shoving a camera in their personal space. This camera feeds into a screen for the whole room to see. The camera is seemingly X-ray; it sees through each participant and exposes their private, inner lives. Mona focuses in on the groin, the breast, and the armpits as dresses reveal hidden breasts, sleeves reveal a “Mum” tattoo and there’s a man wearing women’s underwear. This relies on camera tricks (the camera isn’t really X-ray), yet the discomfort it creates is real. Combine this with ‘Corps étranger’ (spoiler: an endoscope shoved down Hatoum’s body) and you start to become acutely aware of how ‘private’ our bodies really are and how uncomfortable we are with inspection. It’s not nice to see bile, mucus, entrails or zoom-in shots of private parts, because we know it could be ours. It makes us uncomfortable to know this.

Unease is a powerful language. The things that make us feel uncomfortable, which disconcert or threaten us… that’s the stuff that talks to us. And I think Mona Hatoum has this language down.

Mona drives this feeling home with ‘Jardin Publique’ (1993), basically a clump of pubes on a chair, and her ‘Works on Paper’ (made from pulp featuring her fingernails and more pubes) as we are drawn closer and closer to the unflatteringly familiar. I never thought loose pubic hair in art would be so utterly disturbing. Indeed, Hatoum expertly forces us to re-examine the familiar such as with ‘Grater Divide’ (2000), which presents us with a menacing cheese grater, scaled up to resemble a room divider. By fusing these two familiar domestic shapes, Hatoum creates something monstruously unfamiliar… a  ‘greater divide’ is thus created between us and the things we consider ‘familiar’. Yet none of Mona’s ‘unfamiliar’ objects come close to matching the defamiliarising effect of the human form. Mona’s biggest tool for discomfort is, after all, our own body. 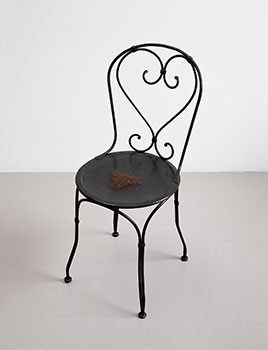 This discomfort showed me that I am not nearly as comfortable with the human body as I thought I was. Apply this to her political messages and the meaning becomes deeper. Her more political pieces, especially ‘Present Tense’ (1996), made me think about how are capable of mistaking the Middle East and its current issues as something familiar too. With those ever-present buzzwords – “Conflict”, “violence”, “casualties”, “refugee” – you risk becoming desensitised. It all becomes too familiar, not real… and you become at ease with it. It is scary to think we can become comfortable with such suffering. Hatoum’s domestic tableau ‘Homebound’ (2000) reminds us of this threat which lies behind the seemingly familiar. Even home is unsafe. With a combination of kitchen utensils and household furniture connected to each other with live electric wire, Hatoum generates tension and insecurity. The crackling buzz of electric current confirms the danger. The barrier of steel separating viewer from death by high voltage also a reminder of domestic confinement and house arrest.

By putting our familiar lives under the microscope, could Hatoum be suggesting we do the same to a nation? To re-examine, “re-sensitise” and try our best to share in the discomfort of the people we read about daily. Could it be that we must make ourselves uncomfortable (deeply, deeply uncomfortable) before we can begin to understand the realities that Hatoum is engaging with?