Don Quixote’s marathon reading in Edinburgh next 23th of April

To commemorate such a special date Summerhall, in Edinburgh, will hold a 4 hours of nonstop public reading hosted by the contemporary Spanish writer Carlos Castán who will also be presenting his novel ‘Bad Light’.

2016 is a year associated with a name: Miguel de Cervantes, one of the most famous writers of all time, known above all as the author of a novel that everyone has heard of: Don Quixote. 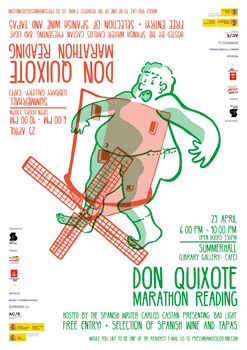 And why is 2016 associated with this author? Because it is the 400th Anniversary of his death, after the 400th Anniversary of the publication of the second part of ‘Don Quixote’ being celebrated in 2015. To commemorate such a special date Summerhall, in Edinburgh, will hold a 4 hours of nonstop public reading hosted by the contemporary Spanish writer Carlos Castán who will also be presenting his novel ‘Bad Light’.

‘Don Quixote’, fully titled ‘The Ingenious Gentleman Don Quixote of La Mancha‘, is a Spanish novel by Miguel de Cervantes Saavedra. Published in two volumes, in 1605 and 1615, Don Quixote is considered one of the most influential works of literature from the Spanish Golden Age and the entire Spanish literary canon and the world’s first modern novel. Still today the adventures of this beloved and misunderstood hero and his sidekick Sancho Panza are very inspirational for new generations.

Book presentation: BAD LIGHT’ by Carlos Castán: An engaging combination of literary fiction and psychological thriller. After both their marriages collapse, two old friends take to sharing their lives again as they used to. They go out for drinks, have long conversations, and try, all in all, to hide away from the world. One day, one of them is stabbed to death in his apartment. His friend will then seek out the truth. An engaging combination of literary fiction and psychological thriller, Bad Light is the debut novel of the most prestigious short-story writer in Spain at the moment. A ruthless reflection on life and the human condition. Carlos Castán was born in Barcelona in 1960.

Vamos Scotland, who is organizing this event for next 23rd April, is looking for readers. Want to be one of them? Why not? Be part of the celebration of the 400 anniversary of the Cervante’s Masterpiece in Edinburgh. You only need to e-mail them to press@vamosscotland.com

This event is organised by Vamos Scotland with the Spanish Embassy in UK, Consulate General of Spain in Edinburgh and Accion Cultural Española, and the support of Estrella Damm, SALT Spanish Academy, Sin Maletas, Word Power Books and Summerhall. Art designer: Samanta Sánchez.