“You know that this cameraman job isn’t going to last forever. It’s more of a vagabond’s job — it may last six months or a year, maybe more, maybe less”. Louis didn’t want to encourage his cousin, because he knew that he was a passionate young man. He didn’t want him to get his hopes up, and he reminded himself, in passing, that many had previously attempted similar ventures, without much success. They had to be realistic.

“You know that this cameraman job isn’t going to last forever. It’s more of a vagabond’s job — it may last six months or a year, maybe more, maybe less”. Louis didn’t want to encourage his cousin, because he knew that he was a passionate young man. He didn’t want him to get his hopes up, and he reminded himself, in passing, that many had previously attempted similar ventures, without much success. They had to be realistic.

Meanwhile, the thirty-three people who had come to attend the event out of curiosity made themselves comfortable in their seats, holding onto their coats, hats, bags and gloves. The metallic click of the cigarette cases closing was heard amongst the murmuring. It smelled of snuff and absinth. No one was more out of place than Louis that cold December morning in 1985.

Auguste and Louis, the brothers from Besançon, had found a place where they could carry out their plans, the Salon Indien du Grand Café. Their cousin, the ever-committed supporter, could not be missing from the venture — he would be the cameraman. A shabby old piano sat in one corner of the room, bored, waiting for the musician to come and play it for one more night, drawing those out-of-tune out from its wooden depths. They had said that the music would be the perfect accompaniment for some moving pictures. The piano never asked any questions. It just did as it was told. Silence. Action. 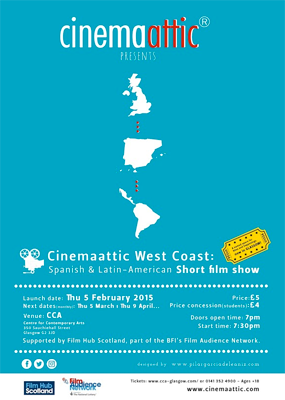 Ten films. Each one three minutes long. A programme that included scenes of a wall being demolished, a train arriving, and workers leaving a factory. One title for them all: “Present-day Matters”. Its success was overwhelming. But on that 28th of September, 1895, in the Salon Indien du Grand Café, nº 14, Boulevard des Capucines, between Paris’s districts 2 and 9, the geniuses Auguste and Louis Lumière made a mistake — they though that this success was fleeting. Without knowing it, their names were being written in gold, and that very afternoon, they became a part of history. Cinema was born.

Since then, so many of us have been captivated by the hypnotic power of the seventh art. Among those, without a doubt, are the members of CinemaAttic.

What began in 2009 as a casual meeting point in an attic in the heart of the Scottish capital for friends to watch, discuss and share films with each other, has ended up becoming a benchmark cultural platform.

‘Bit by bit’, ‘step by step’ CinemaAttic has slowly got bigger. Edinburgh Filmhouse, the Consulate and the Ministry of Culture are among their main supporters.

Up to now, they have produced and organized six film and art festivals (Iberodocs, the Iberian-American documentary festival in Scotland, being one of them), as well as entertained us with the ‘CinemaAttic nights’, where, every month, without fail, Summerhall  in Edinburgh opens its doors to us to show the “cultural and strange” magic of classic Spanish cinema. It’s an undoubtedly different cinema, which isn’t always open to the public, where the short-film genre is the principle point of focus. Furthermore, the films are always subtitled in English so that the notion of sharing, as is their goal, is made simpler.

So come along and see for yourself, because CinemaAttic are taking it one step further, since they will soon be taking on Glasgow! Thanks to the collaboration of  CCA and Film Hub Scotland, we’re going to be able to enjoy a little more of the good work of CinemaAttic. Scotland’s largest city will be the scene of this new venture, and the short film will be the indisputable protagonist of its events. In this way, a little more colour will be added to the already bubbling cultural scene in Glasgow. And who knows if this event today will not end up making history tomorrow. I wonder what would Louis Lumière think of all of this… After all, life is a mystery. A mystery, which many measure with soundtracks, but many others prefer the gauge of cinema. This way, life can be like a romantic film, sometimes, like a thriller, other times, and for the most part, a tragi-comedy…

On this occasion, for CinemaAttic, it will be an adventure film.

Koldo Camacho and the objects that stand the test of time

Guido Benedicto, The Journey of a Film-maker in the Making