It must have been around one o’clock because lunch was being served. Nothing too special, it was a Thursday and a week like any other. Mike, the Events Manager for BFI, took me to one side and asked me to take particularly good care of this one table. I look over and see two men sitting at it, one of whom is wearing glasses with thick, dark, wooden frames. If there was an artist in the house, it was definitely this guy!

I asked Mike who the men were and he tells me that this very night marks the start of a three-day marathon about Canadian visual artists, to which he adds, “I’ve seen this show before — it’s incredible! They connect these machines up to seismographs to create real-time visuals which they then flood with a soundscape that changes along with the data.” 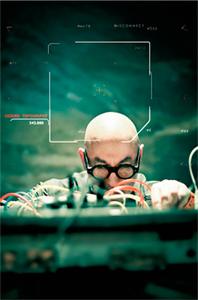 Interesting. It’s raining outside, and my shift doesn’t end until 4 — I think to myself — let’s go over there and make some conversation. See you later Mike! And so I approach the table, warmly greet the guests and begin to recite (and tear up!) my waiter’s speech which is so overused in English-speaking countries. In such a repetitive job, it’s vital that you trust in that never-ending sense of curiosity which we have towards all the variety and differences that the human race has to offer. Let’s just say that that’s the best bit about having a customer-facing job.

A few hours later and there I was, sat right in the middle of the audience, in good company and ready to watch and listen to whatever it was that I was about to witness, without knowing that I was entering into a realm of art that was completely new to me.

They presented us with two performances [SEISMIK y AFTERSHOCK], which lasted around an hour in total. On stage, you could see lots of cables, metal boxes, electric circuits and a pair of Macbooks. The curtains were fully drawn back to reveal an immense screen which filled me with excitement; this was going to be quite something… something INTENSE.

I decided that if I liked what I saw, I would chat to him.

The following day, we had a long discussion over dinner at that same restaurant, an hour before my evening shift was due to start.

Herman Kolgen: “From the Invisible Earth to the Palpable Frequencies”

It’s always nice to be amused by new things. For me, meeting Herman Kolgen (the Canadian ‘audio-cinetic’ artist and innovator of the interaction between performance and binary data) was like chatting to a space explorer. It was a real opportunity to be witness to the artist’s relationship with fame and his creative journey along a new and undefined path.

In his show ‘SEISMIK’, Kolgen works with various seismographs and over the course of half an hour, directly translates the data they receive into images and sounds.

Where do you come from, Kolgen?

In order to understand audio-cinetics, you first need to have a sense of rhythm. From what I’ve heard, the whole thing started with a drum kit. Rhythm. However Kolgen felt that there was “something missing” and so, he bought himself a synthesiser (seeing as they were just coming into fashion) and hooked it up to a vibraphone so that he could add melodies. But his real discovery came when he got hold of one of the first computers that could collect images and sounds separately.

With his experimental films and soundtracks for short-films, Kolgen became focused on creating ever-more embracing soundscapes. He experimented with the deconstruction of narratives and also with the interpretation of computer data, which quickly became one and the same, seeing as both image and sound contain data. “And so, I focused on data… that’s to say, the interpretation of data.” 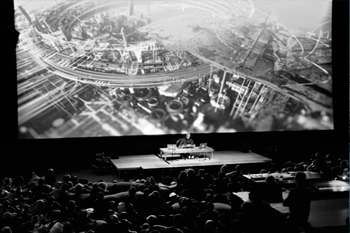 And now he’s working with frequencies…

In his project PIXELS, for example, each pixel triggers an audio-visual response. “In SEISMIK, I have a collection of clips which are played in accordance to whatever real-time data is being picked up by the seismographs. I always work with binary code, seeing as all data is codified in this way.”

The artist’s touch is in…

“Everything. We all use the same pigments, so the difference isn’t in what we use, but in how we use these pigments. With access to a list of data and a collection of scientific results, my job is to think of ways in which this information can be matched up to sounds and projections, without it all becoming a meaningless mess. On top of this, whichever room I’m in, I record data in that very room and then add that to the work.

At the end of the day, the whole point of the piece is to get people to think and also about opening up an aesthetic debate.

Do similar frequencies ever come up?

Of course. Let’s say that there’s a frequency of 2.2 in San Andreas, and also in Japan or any other thousand places that you can think of.

What changes, as far as the audience’s experience is concerned is the  frequency’s pathway, not only in where we come from but also the evolution of the frequency itself. The readings on the seismographs are constantly fluctuating, and those variations are reflected in the piece. The development of these movements which create the wave of frequencies is constantly shifting and changing in a unique way.

How would you decide on your approach?

Frequencies can be interpreted in any number of ways. When I began, my initial aim was to bring the visual and the audio together. However, I realised 10 years ago that my real interest was in territories and the impact that they have on us as humans.

This is examined in AFTERSHOCK, which looks at the impact of nuclear waste on affected zones. In SEISMIK, it’s about the territories that lie on tectonic plates and in another project named DUST, it’s about the ever-present particles which surround us and pervade our own territory. 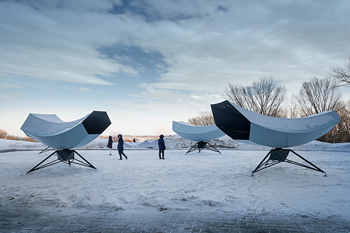 What direction is Kolgen taking now?

All I know for sure is that I’m working on a project about pollution. Pollution is measured in such a way that we can, at any given time, identify which chemical components come into play whether it’s in Okinawa or Mexico City. The show would feature a 3D projection of a cloud which changes in colour and density depending on whether an area is more or less polluted. We would move from a dense, noisy and unpleasant cloud to one which reflects the level of pollution in Canadian forests. I’m soon due to present a series of touring installations about wind, called EOTONE. The whole piece centres around four revolving structures which are each connected in real-time to wind gauges around the world (New York, Moscow, Montreal and Bali). If, for example, there’s a windstorm in Japan, the sensor would send that information over to the installation, which in turn would emit a sound in such a way that the audience sat in the middle of it all would hear a harmony of the four chosen winds. It’s a very moving experience.

Silence. And with that, I think we’ll call it a day.

To which he got up and we said our goodbyes. They had already announced the start of his show on the megaphone. Goodbye. He left. My boss was looking at me, with my uniform at the ready. It was 5:15! “I’m sorry, I’m late!” I blurted. “I know you are.” And just like that, surrounded by confusion, Friday night’s shift got underway.

He has a degree in Communication. He was born in Belgium and lived until he was 12 years old in France when he moved to Valencia. Guido is a filmmaker, producer and director of his own short films and corporate videos. You can find him at any film library, theater or music festival. He is always trying to get that interview that gives him a challenge or fill out his craving for curiosity.

The New Latin Wave and its Dark Tropicalism