The New Latin Wave and its Dark Tropicalism

When New Wave music in America detached itself from punk rock in the 70s, there were many who started to label it. At the time it was bands like Blondie and The B-52´s who started something that was defined by the attitude and style of a generation rather than by music itself.


When New Wave music in America detached itself from punk rock in the 70s, there were many who started to label it. At the time it was bands like Blondie and The B-52´s who started something that was defined by the attitude and style of a generation rather than by music itself.

One of the main figures of that era, had anticipated what was going to happen 30 years down the line with the globalisation. Something was bound to happen. It was the realisation that there was no need for labelling. The problem was that no one made accurate readings. In 1989 David Byrne, the life and soul of Talking Heads, achieved the imminent fusion between the artistic borders of the Spanish Speaking lands and the Anglo world with one album: Rei Momo.

This was a misunderstood masterpiece which still remains current. It didn’t belong in its time. When this album was made, shortly after came the golden years for Juan Luis Guerra, and Byrne was inspired by what was Latin at that time. 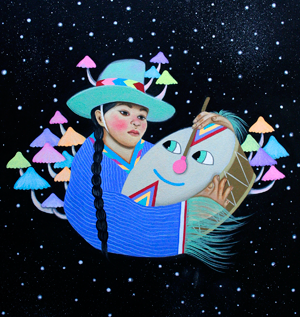 Now, current young musicians, born and grown up in the golden decade of the 80s and 90s put aside their complexes and recognised their roots to work with them in a different way. They have an interest in blending these sounds with recent trends, keeping away from the stereotypes and reclaiming music as a noble way of working into the future.

Gizmo Varillas, Ibeyi, Le Parody, Buscabulla, Ondatrópica, Arca or El Guincho, these new musicians have learned the lesson naturally, with no need of fusion. In fact we’re at a time where it’s now the Anglo-Saxon forefront which moves towards the Spanish speaking communities. This is happening with artists such as Quantic and Devendra Barnhart, or even the always classy and powerful Royal Opera House with its new La Havana inspired programme Cubanía. Also, others such as XLR8R, Converse, Pitchfork, Young California or Boiler Room.

New music created or interpreted by these artists is no longer aesthetically Latin but Dark and Tropical – always a punch in the nose, and it has evolved far from the well known label. They are coming with sweet vibes, spicy and wild beats, jungle atmosphere, Africanized drums and Andean folk -just to say a few. Yet they still proudly show their Hispanic side, as well as their native language. And social and political events in our era omit the term Latin and replace it for its counterpart ‘Hispanic’, merging the past and future. ‘New Latin Wave’ is about disassociating everything that was once made public, to what is being made today.

See it for yourself: If you are in London next Tuesday, June 16, don’t miss the live shows of Gizmo Varillas (Cardiff, UK) and Le Parody (Madrid, Spain) at Stage3 (291 Mare St, Hackney, London, E8 1EJ). It is the perfect way to introduce you into that we are talking about. Don’t wait to listen about it from everybody over the next years. Be the first.