Pedro Font Alba is one of the fifty Spanish artists portrayed in ‘Art On The Move’. I had met this lively and energetic architect in several cultural events around London because he is one of the co-founders of SCAN (Spanish Contemporary Art Network), a platform that promotes Spanish artists where he is doing a remarkable job.

The day we met for the photo shoot, Pedro gave me a guided tour around the premises of the international architecture practice KPF in Covent Garden, where he works. As he showed me the different stages of an architecture project, I tried to catch with my camera the enthusiasm he puts into all his ventures. 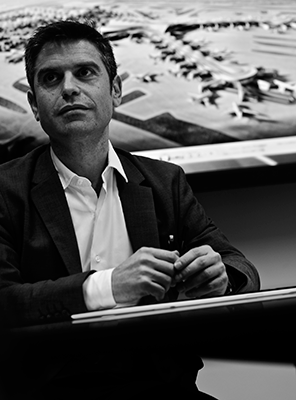 Pedro arrived in London in September 1997 to study a Master’s Degree in architecture at The Barlett School of Architecture. The cultural offer and the quality of the architecture schools in this city determined his choice. His experience at The Barlett was deeply revealing and it allowed him to conceive architecture from a completely different point of view. At the University of Seville, in Spain, he had learned the importance of composition and rigour, both technical and conceptual. In London his tutor and mentor, Sir Peter Cook of Archigram, appealed to the innovative spirit of his students and constantly stressed the importance of ‘the idea’ in the design process.

Professionally, London has offered him the opportunity to work in large-scale international projects such as the Abu Dhabi airport, currently under construction, and share experiences with first-class professionals from all over the world.

When I asked him about his relationship with the Spanish community, Pedro confessed that he is not very fond of this term for its segregational connotations. Having said this, he admits that there are special links between the Spanish people in the city, as they share common experiences. There is a considerable number of Spaniards living in London and many of them are perfectly integrated in the British society, learning the language, occupying positions of responsibility in companies, attending university or researching. At KPF he has the privilege of working with Spahish architects of great quaility, both human and professional, from whom he learns on a daily basis. Also, SCAN has given him the opportunity to connect with the diverse Spanish and Latin American creative circles in London, and enjoy the friendship of an important group of artists who inspire him and give him the energy to continue with his artistic dissemination work.

(The exposition Art On The Move. A Portrait Of 50 Spanish Artists Based in London by Lorenzo Hernandez will take place at the 12 Star Gallery, Europe House, 12 Smith Square, London SW 1P 3EU, from 17 to 26 February 2016)