Julieta (2016). A universal tragedy. Oscar-worthy on every front.

Following its election as Spain’s foreign-language Oscar candidate in the 88th anniversary of the Academy Awards, Brit Es takes a closer look at ‘Julieta’, Almodóvar’s most serious film to date…


Something’s changed on Almodóvar’s palette (and it’s not his colour!). This provocative artist of the screen has picked up a thinner brush, drained out the playfulness, washed off the humour and left us with a much grittier side to his world. Following its election as Spain’s foreign-language Oscar candidate in the 88th anniversary of the Academy Awards, Brit Es takes a closer look at ‘Julieta’.

Separation between parent and child is something that many of us in the UK can relate too… perhaps something we especially relate to.(…) This is why see ‘Julieta’ can be seen as having a distinctly un-Spanish feel. For the first time, what we see on screen is actually closer to us than it is to Almodóvar…

‘Julieta’ (2016) casts a darker shadow over many of the themes that have defined Almodóvar’s work over his past 19 films. The most notable? His treatment of motherhood. Here, his conventional portrayal and celebrations of motherhood become obscured and instead we get a vision of motherhood characterised by absence. For Julieta (a role shared by Emma Suarez and Adriana Ugarte), her maternal role becomes nothing short of a curse as she is left behind by her fleeing daughter Antía. Through a series of retrospective flashbacks and narration, Almodóvar creates an atmosphere of obsession and guilt which tortures Julieta and prevents her from moving on. The story reflects the paralysis of a mother who constantly re-examines her past to the point that she is left without an identity of her own. She is a mother, or she is nothing; a crisis captured beautifully in Julieta’s tragic line: “Your absence fills my entire life”.

Given the themes and sentiment of the film, one would expect ‘Julieta’ to really strike a chord with audiences in the UK. Unlike his last film – ‘I’m so Excited!’ (‘Los Amantes Pasajeros’, 2013) – which flopped outside Spain, ‘Julieta’ will speak to the heart of many British people. That gulf or separation between parent and child is something that many of us in the UK can relate too… perhaps something we especially relate to. Almodóvar has compared the Spanish family structure to “an umbilical cord joining us to our parents and grandparents [which] survives the passing of time”. 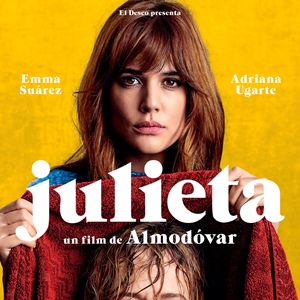 Can we really say the same about ours here in the UK? In our English-speaking worlds, it is more normal to leave home early, to go to university or work in other cities, to distance ourselves and seek lives where the parent is a more peripheral figure. We actively and at times fiercely seek independence from our homes. This is why see ‘Julieta’ can be seen as having a distinctly un-Spanish feel. For the first time, what we see on screen is actually closer to us than it is to Almodóvar… and he accepts this. Why else did he plan this to be his first ever English-language film? Adapted from Canadian novelist Alice Munro’s Runaway. Plans to shoot in New York. Meryl Streep to play the lead. This is an English-language tragedy through-and-through.

Of course, ‘Julieta’ ended up in Almodóvar’s mother tongue. Nonetheless, those raw English-language sentiments will carry more international weight than his earlier, cult-films. Perhaps, this is the beginning of a new era for Almodóvar as he actively adopts a wiser and graver vision… a vision which is beginning to expand beyond the confines of Spain and onto a universal playing field.

Up to now, we have been so used to celebrating Almodóvar for his foreign, unfamiliar ‘otherness’. Indeed, one cannot easily relate to Almodóvar’s manically lurid and scandalous world. This is literally the point of his work… to provoke, to shock, to entertain and to scandalise! Over his last 19 features, Almodóvar has blown up our reality in an explosion of Madrilenian excitement. This time, he has decided to pick up the  pieces of rubble and create something disturbingly close to home. And what better place to start tackling our present realities than with the distancing between child and parent? A universal tragedy. Oscar-worthy on every front.