Today the whole gang—Carlos, Juliana, Victor, Leon—took me to El Valle de los Caídos, a Catholic basilica and monumental memorial: where Franco used to come to see the whole city. Skimmed through my guidebook. The huge crucifixion monument was built by war prisoners. Franco himself buried in the great basilica. Victor said something about fascists going there to party.

Drive fantastic. Roof down, weather beautiful. Valley either side of the road, dense with trees, steadily climbing on the other side into a huge mountain – and the monument on top. Drank a strange bebida: juice and milk. Passed the carton between us. The others sang to the radio. 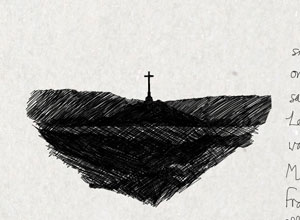 Back to the apartment, had a drink with Adriana. Still angry. Juliana went to the shop and Adriana shouted at her down the phone. Then she had a go at Carlos and went kicking about in her bedroom. I tried to make a bit of conversation, telling her my plans to visit the Thyssen and Reina Sofia galleries. She told me no. Said just one. They need time. I said I’d go to Thyssen for the Edward Hopper, but she wrinkled her nose at this, turned away.

Later, dinner, clubbing. Went to Ego. Got drunk pretty fast. So much colour, light. Everything moving like fire and water. The language was music, dance. I was on top of the world.

Carlos and Victor went off together. Juliana and Leon tried to push me into the arms of a blonde girl with a lip ring. Leon, usually surly and quiet, surprised me by slurring pretty decent English in my ear:

‘Don’t reject at midnight what you’d follow at three and pay for at six.’

Right. I laughed, told him there was someone at home.

‘No ugly girls,’ he said. ‘Just not enough of alcohol!’

Don’t remember when we left.