Hidden away behind the thick brutalist walls of the Barbican lies a miniature time loop. This overwhelming vortex of repeating imagery and sound is the brainchild of eccentric Icelandic perseverance artist Ragnar Kjartansson. An intriguing space where repetition runs riot…


Hidden away behind the thick brutalist walls of the Barbican lies a miniature time loop. This overwhelming vortex of repeating imagery and sound is the brainchild of eccentric Icelandic perseverance artist Ragnar Kjartansson. An intriguing space where repetition runs riot… 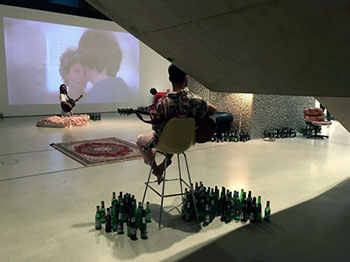 ‘Take Me Here by the Dishwasher: Memorial for a Marriage’ (2011)

To say that Kjartansson’s performance art is about repetition is frankly an understatement. His work is repetition. Indeed, his childhood is too. Born in Reykjavík to a family of actors, Kjartansson’s first experiences of the world came from the wings of the theatre. A young child gazing through the curtains at that endless process of rehearsal, rehearsal and more rehearsal followed by performance, performance, performance. This baptism of repetition is clearly what shapes and inspires his fascinatingly unique approach to life and the human condition.

As we enter Kjartansson’s lair, we are immediately confronted by his 2011 piece ‘Take Me Here by the Dishwasher: Memorial for a Marriage’, featuring ten live performers who stroll around singing the same melancholic refrain for eight hours, each and every day of the run. Guitars in hand, these straggly performers slowly traverse their squat-like surroundings… to a backdrop of Icelandic pseudo-porn. Weird? This erotic clip of love-making actually features Kjartansson’s own parents;  “Take off your clothes! Take me, take me here by the dishwasher!” cries his mother! Crossing kitsch dishwasher-boy fantasy with sorrowful guitar feels like sticking pink bubblegum into a Nirvana song. Incongruous? Yes. Mad? Certainly! 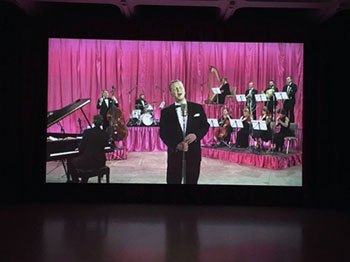 But then you get something like ‘The Visitors’ (2014); his most celebrated piece – and you can see why! Picture a curtained darkroom full of installation screens, each one lighting up to project a solitary figure sat tuning their respective instrument. Nine in total, they are Kjartansson and his musician friends each occupying a different room in the grand yet crumbling Rokeby Farm estate, New York. Simultaneously, they begin to play their sorrowful ode – a ‘feminine nihilistic gospel song’ – which builds through synchronised harmonies into a powerful symphony. The space between the screens starts to diminish. Gaps are closed. The isolated and lonely musicians become one.

This is empowerment through repetition. Kjartansson’s vision demonstrates the immense potential of the weak and solitary voice once it becomes united with others. The inherent strength of a chorus. This same repeated lyric – much like a prayer or protest chant – begins to build into something shared and transcendent. In this moving display, repetition and power become synonymous.

However, Kjartansson’s treatment of repetition is far from one dimensional. Sure it’s empowering, but its also sinister, haunting, humorous and intimate. ‘Me and My Mother’ (2000) chimes with a wonderful sense of closeness and comedy as he films his mother repeatedly spitting in his face with four identical scenarios filmed 5 years apart. 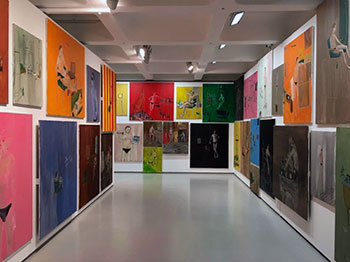 ‘God’ (2009) hypnotises the spectator in a creepy mantra – Sorrow conquers Happiness – sung in loop for one hour by Kjartansson dressed as a 1940s crooner, accompanied by an orchestra on a gaudy pink draped stage. ‘A Lot of Sorrow’ (2013) takes this one step further; a six hour looped performance by US band The National with similar lyrics. Whilst sorrow is eerily subliminal in the former, the latter makes it dark and haunting. ‘The End’ (2006) uses repetition to parody the motif of the obsessed artist; Kjartansson plays the artist who paints his muse each day for 6 months in Venice. 144 paintings accumulate. Repetition here is manic but also endearingly ridiculous. The muse is not naked. He is wearing Speedos and smoking cigarettes.

In Ragnar Kjartansson’s world, repetition undoubtedly runs riot. Yet through his multifaceted approach, repetition becomes interesting. We cannot deny that our lives are largely repetitive. In fact we cannot live without it! Familiarity, habit, routine, friendship even love… it all relies to some extent on a culture of repetition. Repetition can be friend or foe. It can inspire us and it can trap us. What Kjartansson shows is that repetition is everything…besides repetitive.

‘Thames Memory & the Exploration of Future Dust’, latest project of Maria José Arceo in collaboration with King’s College of London