González shows in his works ‘surrealistic’ architecture in a natural landscape. His visionary constructions are close to Le Corbusier, projects of buildings made out of béton brut and futuristic visions of cities inspired by Japanese metabolism architecture especially Kenzo Tange and Kisho Kurokawa. But González does not limit himself only to architecture sketches. He is exploring any kind of art, getting inspiration from Italian Futurist movement, Giorgio de Chirico’s archways and Xavier Corberó’s architectural sculptures.

González has always had a fascination with architecture and different types of societies. Especially their unique characteristics, that defines the environment in which they live.

In the “Dauphin Island” series he is showing architecture as a shelter. Dauphin Island is located off the coast of Alabama and is known as the “depressed America”. The island has experienced throughout history strange circumstances of adversity. It is exposed to all kinds of natural disasters such as cyclones, hurricanes etc. And yet there is a kind of ghostly architecture that made her really attractive. González’s ‘bunker’ architecture on Dauphin Island is created with oblong or curved spaces to help the wind to pass through and maintain a thread of rationality around that delirium. In this series González also focus on unique and mysterious floating city, which is Venice. City, which was built on a land, accurately water, a place where city should never be found. Again, he is fascinated by something highly unrealistic, but possible to make with human mind, power and dreams.

The “Inter-action” series starts with the question about ruins: “How is a ruin created?” Ruin as a symbol of abandonment, which lead us to a state of deterioration and the imperfect. Rudy Kousbroek says:

“[maybe] the fact that a building ended up turning into a ruin was not more [but] a consequence of lack of decision?”.

In a ruin, nature enters the building and takes over the cities, not the other way round. So, what define a border between inside and outside? Where does the outside ends and inside begins? F. LL. Wright, points to the wall as a border. But, what about light and space? Dionisio González separates those two concepts with his symbolic architecture and the fact that the constructions in the “Inter-action” series are set on pillars. 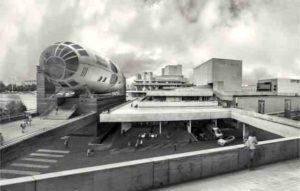 Contact with ground is limited, space is open, but walls still create asylum. What if the asylum is just another ruin? A simple place without or rather with “lack of decision?”. Futuristic architecture, dynamic of shapes and directions, sometimes too sharp edges, buildings that appear out of the blue in the city landscape. Pure fantasy. That’s what defines Dionisio González architecture of tomorrow. Images of future. Future that happens now.

Marco Godoy at ARCO2018. Fiction as an Instrument of Power