IberoDocs kicks off with ‘Gabo: The Creation of Gabriel García Marquez’… a biopic on Colombia’s greatest writer

The third edition of IberoDocs kicks off with a screening of Justin Webster’s ‘Gabo: The Creation of Gabriel García Marquez’, this evening at the Edinburgh Filmhouse. A documentary which captures the true spirit of IberoDocs and its aims to showcase and promote the very best of Ibero-American culture.


The third edition of IberoDocs kicks off with a screening of Justin Webster’s ‘Gabo: The Creation of Gabriel García Marquez’, this evening at the Edinburgh Filmhouse. A documentary which captures the true spirit of IberoDocs and its aims to showcase and promote the very best of Ibero-American culture… And what better way of celebrating than with this homage to García Marquez, one its greatest contributors?

The piece is directed by the Barcelona-based Brit, Justin Webster, whose previous films include ‘José María Aznar’s Unfinished Buisness’ (2010), and his award-winning insight into the life of Baltasar Garzón, with ‘Convict the Judge’ (2011)… and there’s something about his passion for telling the true story behind his subjects (high-profile Spaniards and Latinos alike) that keeps us on the edge of our seats… a dramatic tension as we wait to discover the man behind the image. The reality. The truth.

‘Gabo: The Creation of Gabriel García Marquez’ achieves just that: a portrait, in documentary form of García Marquez, the man. Through conversations with Gabo’s friends, family, literary experts (which include his siblings Aída and Jaime) and biographer Gerald Martin, this documentary provides answers to Colombian novelist Juan Gabriel Vásquez’s million-dollar question: how one man managed to single-handedly change the face of 20th century literature…

The filming began shortly after Gabo’s death on April 17th 2014 and continued into the start of the following year. Shooting took place in a variety of locations from Colombia’s capital in Bogotá to its Caribbean coastline (including Aracataca, Sucre, Cartegena de Indias and Baranquilla) as well as Paris, Barcelona, London and New York. 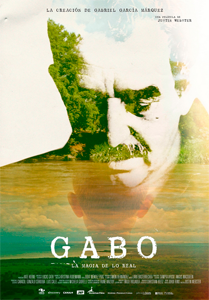 The film delves deep into writer’s past, right back to his earliest childhood; an upbringing at the hands of his superstitious grandmother and war-veteran grandfather who spoke to young ‘Gabito’ like an adult. His grandparents would come to be a major source of inspiration for Gabo, as his constant references suggest. However, following the death of his grandfather, Gabo moved from Aracataca to join his parents in Sucre, where he would remain until being sent off to boarding school in La Barranquilla. In the interviews, his siblings recall him as a boy with a wild imagination, a lovely singing voice… and always the grandparents’ favourite. Gabo’s father owned a homeopathic pharmacy and never saw eye to eye with the grandfather. His mother, despite lacking in education, was a relatively cultured women who taught all the children to read… all eleven of them.

“I lived in a house where a new sibling was born each year… that’s when I knew it was time to leave”, says Gabo.

The accounts given by his friend Plinio Apuleyo Mendoza play a similarly crucial role in uncovering the ‘real’ Gabo, and explaining his phenomenal journey from village boy to Nobel Prize-winning intellectual and close friend of Fidel Castro. According to Mendoza, it was whilst studying in Bogotá (having completed his secondary studies to pursue Law) that Gabo found his calling as a journalist. It was also in Bogotá where Gabo would begin writing for El Espectador as a reporter and film critic; a return to the capital in 1952 which was prompted by his friend Álvaro Muti. Gabo used El Espectador as a platform from which to publish his first story ‘Relato de un náufrago’ (‘The Story of a Shipwrecked Sailor’), which effectively launched his career as an author. From there, the new start reporter was sent over to Europe where he would begin writing his famous ‘El Coronel no tiene quien le escriba’ (‘No One Writes to the Colonel’).

“…and so I reached my first goal in life: a chance to sit down and write in peace”

However, life proved to be extremely tough in Europe. Following the closure of El Espectador, Gabo’s paycheck ceased to arrive, leaving him with scarcely enough to eat… let alone pay his pension. Yet, this period also marks the writer’s blossoming love affair with actress Tach Quintana, who offers us a first-hand account of their times together whilst he was living in Paris.

It’s equally fascinating to hear the stories of those who worked and lived alongside Gabo during his Barcelona years. After all, Spain was where Gabo really matured into a writer, and where he mastered the art of public speaking. Editor and literary-agent Carmen Balcells describes him as a shy, sensitive man and a best-selling author.

A documentary which captures the true spirit of IberoDocs and its aims to showcase and promote the very best of Ibero-American culture.

Barcelona was also where he befriended Mario Vargas Llosa and other Latin American intellectuals… a circle with whom he shared many experiences and indeed fall outs, most notably over their decision to sign a petition against Castro and his Cuban Revolution; a move pushed forwards, above all by Vargas Llosa. Gabo’s participation remains at best questionable, with rumours circulating that his friend Mendoza signed for him; a speculation which the documentary promptly confirms.

Additionally, Gabo’s high-profile friendships with left-wing politicians ranging from Castro to Bill Clinton (who also features in the documentary) combined with his literary strike (when he famously refused to pick up his pen until Pinochet was toppled) often landed him in hot water with the Conservative Right, who constantly monitored him on suspicion of threat. Yet despite these suspicions, Gabo never once declared himself a communist and only ever expressed his political struggle through journalism and literature…

“Throughout my life, my only weapon has been my typewriter”

The film also reflects the unconditional support given by his wife Mercedes and their children. Gabo’s family, who he held very close to his heart, would go with him wherever he went, behind him every step of the way through thick and thin. As he himself states, Mercedes inspired almost all the female characters in his stories.

This is a documentary which allows us to rediscover the writer and uncover the man. A man driven by a love of life; a wonderful conversationalist with a fantastic sense of humour and and a real tenderness… and without doubt the father of Magic Realism in the 20th century – “a man who told stories like they’d never been told before”. ‘Gabo’ is a film about the power of imagination; a tapestry which weaves the threads of García Marquez’s life and works with spectacular intensity.

Editor in chief & Creative Director. BA in Graphic Design at the Escuela Pablo Picasso in A Coruña (1997). The best letter of introduction is her portfolio, her best weapons are her creativity and her communication skills. She has built her career in A Coruña and London, living with one foot in each city since 2001. She has worked at La Voz de Galicia, in the creative department at Idea and at the London multinational Pentagram Design. Granddaughter of a photographer, her father was an artist and her mother is a writer. In 2013 she is embarking on this new project: a change in direction in her career that lets her combine two of her passions: art and publishing. She is Associate and Art Director of Anorak Studio and member of MAV (Women's in Visual Arts)

La Beti: “Being a showgirl’s great!”