Le Dame Art Gallery presented last 6th of May the exhibition New York/Rome Minimalism/Arte Povera curated by Lorenzo Belenguer. An invitation to explore the strong links between Rome and New York in the 60s as a starting point, how they influenced each other and how prevalent they are today in Contemporary Art. The influential YBA, Gavin Turk, leads a selection of six artists from Britain, Israel, Spain and Croatia to demonstrate that both movements are still very current in art making today.

A minimalistic aesthetic has always fascinated artists. But it is in the 60s when a movement, Minimalism, was developed as a reaction to the Abstract Expressionism in vogue in those years. Around the same time, the term Arte Povera was coined by the art critic Germano Celant, literally meaning “poor art”, because of its use of everyday or “poor” materials. It also started as a reaction to abstract painting. However the production process is very different in both movements. Minimalism favours industrial manufacturing while Arte Povera assembles daily objects, both following a rigorous intellectual process and aiming for a basic, and perhaps spiritual, presentation of ideas. 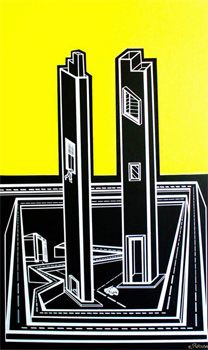 Contemporary Minimalism is a fusion of many movements. Nowadays artists feel free from the corset of manifestos from the last century and pick and choose as they wish. A selection of six artists demonstrates that Minimalism can also be presented as art in movement, or kinetically, in the contribution of Gavin Turk; as photojournalism of an island destroyed by bombs during the Second War World; as Surrealism with basic colouring. Or just as an artwork where the terms Minimalism and Arte Povera can be interchanged.

Belenguer, the curator and one of the exhibiting artists, says: “The 60s produced some of the most innovative movements in Art History and I find Minimalism and Arte Povera rather unique. Based in two different cities in two different continents, a strong dialogue between both took place. I would like to present this show as a starting point of future projects with works by Serra, Judd, Flavin, Pistoletto, Andre, Penone, Merz, Kounellis, etc, shown alongside contemporary artists such as the ones introduced in this exhibition. A dialogue in the making.”

Cristina Cellini Antonini,  co-director with Chiara Canal of Le Dame gallery, adds: “As someone born in Rome, I have always been aware of the strong dialogue between Rome and New York since many Italians emigrated there in the 50s and 60s. I am pleased that the movements originated in that decade, Arte Povera and Minimalism, are still very influential in today’s artists. Artists of the calibre of Gavin Turk will exhibit alongside a very interesting roster of up and coming artists and we are proud to facilitate this project.”

LORENZO BELENGUER (cargocollective.com/LorenzoBelenguer)
Lorenzo Belenguer’s work straddles the realms of sculpture, painting and drawing. In one area of his practice, he transforms metal objects into sculptures that evolve from the visual rhetoric of Minimalism and double as ‘canvases’. Spanish artist based in London highly influenced by Minimalism and Arte Povera. Lorenzo Belenguer was one of the two performers invited by Leah Capaldi to perform ‘Hung’ at the Serpentine Gallery. Tate Liverpool as part of the Keywords project. ‘No Soul for Sale’ at the Tate Modern and many other exhibitions mainly held in London. Last year, Belenguer exhibited alongside 56th Venice Biennale.

EVA RABOSO (evaraboso.com)
Eva Raboso is self-taught in painting, drawing and would capture on any surface everything that comes out of her imagination, but her curiosity has led her to create a unique and original artistic movement, the Vertical Urban. Canvases with black matte background, dozens of layers of color glossy acrylic forming buildings, cars, apparently simple lines, a point of infinite flight and different axes, equal to-none contiguo- form sets that come alive only by a simple gesture: place an object in front of the box. Any camera or mobile phone makes ‘magic’ to focus their creations. And also in this style based on observation, the Valencian artist uses the brush to express Bad Dreams, a neo-expressionist abstract collection, with which he tries to escape the perfectionist mechanics of straight lines that are trapped for weeks when developing series Urban. But his art also involves experimentation street. Eva creates sculptures on car roofs in scrap yards, ship decks or simple pieces of metal, where toy cars, their ‘toys’, and acrylic colors brighten scenarios in gray top, industrial cutting. These creations, sometimes ephemeral, especially when plasma on concrete blocks on the street, they become immortal when frozen in the photographs Eva soulful.

‘Pepe Mujica, Lessons from the Flowerbed’ by Heidi Specogna at IberoDocs 2016

IberoDocs kicks off with ‘Gabo: The Creation of Gabriel García Marquez’… a biopic on Colombia’s greatest writer