Agustin Coll, an illustrator who moves amongst Personified Architecture, storyboards and murals.

Agustin Coll talks about living as an illustrator in London, from daily routine to finding inspiration for his work.


Born in Barcelona, Agustin Coll studied Film and TV at ESCAC, University of Barcelona, specialising in Art. He moved to London seven years ago to study for a master’s degree in Visual Arts at Camberwell College. This is where he started his most ambitious project: Personified Architecture. In this project, he illustrates famous buildings, giving them a personality. His interest in architecture is influenced by his father, an architect. His sense of humour is also reflected in his works. Many of those illustrations have been sold as canvasses or published in magazines. Agusti is always searching for and observing emblematic buildings to give them life. It’s a project that’s constantly developing. However, his main activity is as a storyboard artist for adverts and music videos. Although he also has published a graphic novel called Rock the Boat (Banter Publishing), he has painted murals, illustrated album covers and 2D animations. Currently he’s immersed as Illustrator and Art Director in Tailless, an interactive storybook aimed to be published as an app. 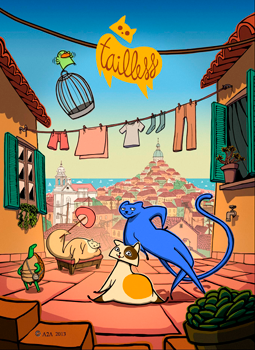 What do you like the most about illustration? The ability to reproduce what is only in my imagination in a way that’s possible to share with others. I remember reading a Tim Burton interview a long time ago, where he said that the sensation of capturing what is only in your mind gets you higher than any drug.

What was your dream job when you were a child? Was it to be an illustrator or something else? It was to work on the Teenage Mutant Ninja Turtles. (laughter)

Really? Yes! I loved the cartoons and toys so much that I wanted to design them myself. So I used to draw comics about the Teenage Mutant Ninja Turtles and their friends.

Is being an illustrator like you imagined when you first started out?  I didn’t have a clear idea about illustration work, but only because I’d never contemplated that option. I simply found myself drawing storyboards for my classmates when I was studying at ESCAC. Later, when word spread, I also drew for my teachers, and when they got a job they used to call me again. Like JA Bayona (director of The Impossible) he called me for his music videos. Without realising, I was getting paid to be a storyboard artist. Honestly, I thought that illustration was more profitable. Nevertheless, you just need to watch Kevin Smith’s movies, like Chasing Amy to realise that drawing doesn’t make much money.

Is the money the main difference? Obviously it is what I’m more concerned about. Although there is also that duller side of the work: to keep update and practise constantly in order to improve the technique. There are always those people who keeps faithful to their own style and doesn’t try to improve, academically-wise. 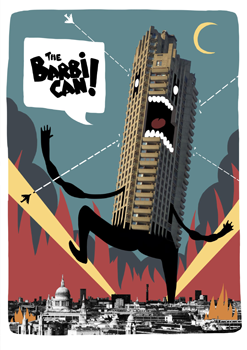 How do you work? Do you work at home? Do you have any special place? Any timetable? It depends. Usually, when I’m working on a storyboard, I go to the studios and I work in their offices. It’s not always like that, sometimes I meet the director in a cafe and they tell me what they need. We draft the shots together and then I go home and I get the storyboard done. When I work on my own projects, like Personified Illustration, I work at home, in a cafe or some place where I feel comfortable. Because sometimes working at home is tiring. When I worked on the comic Rock the Boat, I did it for nine months, I used to work at home and it was quite exhausting, mentally exhausting.

What you do more often is storyboards, but you also have worked in murals, album covers, comics, storybooks, canvas… What do you like the most?  I enjoy doing a bit of everything. Actually, I need it because if I do always the same I feel bored and fed up. For instance, Tailless, it is an interactive storyboard that I’m working on, it is a very different style, like traditional cartoons. But it is a pleasure to do something much lighter and amusing that, for example, the Personified Architecture that it can be a bit heavy going, or storyboards that they are very technical and sometimes stressful.

Regarding your Personified Architecture works, how do you decide what personality to give the buildings? Generally, I get a lot of information beforehand. I read about the building’s history, the period that it was built, why it was built, what it is used for or what kind of people live there, etc. Although sometimes it’s not reflected in the final work, it is a very important part of the creative process. In many cases, it can be down to a very simple reason: the building’s appearance, social connotations or people’s prejudices towards some kind of architecture. In fact, it is possible to say many things about ourselves according how we perceive architecture, how we understand society or how we connect with the space.

In general, where do you get your inspiration?  It’s strange. I wouldn’t know how to explain it. I got some of the best ideas riding my bike. Cycling around London is a great source of inspiration. Especially when it’s about illustrating architecture, because it’s the best way to discover buildings and new areas that can give me new ideas. 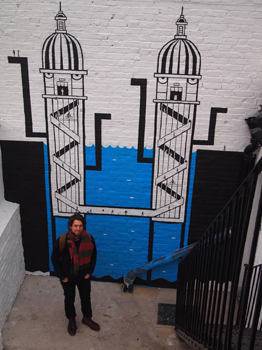 Art is expression, what is that you want to communicate? This sounds pretty bombastic. There is not a specific thing that I’d like to communicate, it just depends on the moment. Ideally, everyone likes to think that the audience will understand or feel what you did. I’m not much interested in understanding the concept in a rational way, rather what sensations and emotions that a work arouses in an observer. I like to think that my works are much more emotional. Empathy is very important in the process. I like to think that I make spectators participate from this world that I’ve created.

What projects are you working on now? Sometimes it’s difficult to summarise all the projects that I’m working on because I’m trying to do many things at the same time. Lately, I have been investing a lot of time in Tailless, this interactive storybook that include small video games. It is very amusing as it’s a project that goes further than simply illustrating. Sometimes we need to do animations, games. I enjoy very much working with other people, in fact, with my friends. It’s great to spend time developing a project together. It’s a long project, always in progress. There is a lot of feedback from several people. I need to be very present in the project and not get too attached to the story because it has to keep evolving, so I have to be ready to do changes. But right now I’m working in a design studios where I’m drawing their designs for medical items. It’s very different than what I usually do but fascinating, because they design items that people need, it’s only about aesthetic or art.

You have been in London for seven years, how has this city treated you? Sometimes I’m very happy to be in London, but quite often I’ve felt miserable. The grey-scale has been eclipsed by those moments that some times have been very difficult. It’s not an easy city. 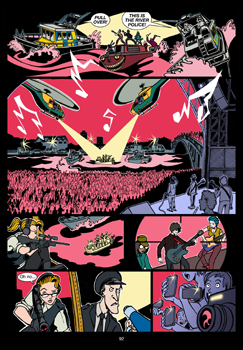 Have you had obstacles or any kind of discrimination for being a foreigner? Not really. I think I’ve been very lucky in this sense and London and British people have accepted me very well. How open you are about their culture and your English level affect this, of course. Actually, we must be realistic. We’re in other country, we’re in the UK, so it’s our responsibility to adapt or, at least, try to know their traditions and find the way to connect with them.

Within your field, as an Illustrator, have you felt discriminated? No, I haven’t because in the creative field it doesn’t matter where you are from as long as you perform well at work. In the storyboard’s world, that it’s where I’ve got my first opportunity, the main thing is that you achieve deadlines, you do good work and you’re able to communicate at a basic level. As long as you know how to do the work, and do it well, it is a very open sector. Actually, the UK is open and free of prejudice, work wise.

Are you planning to go back to Spain? Not any time soon. Maybe if there were better job prospects, I would think about it. But because of an obvious reason: the weather is a good incentive and also the lifestyle. I know that if I had to start a family, I would do it in Spain. I know that I will finish my life there. But for the moment, I have no plans to return. I’m OK here and London gives me what I need.

For more information about Agusti Coll and his work follow the links below:

David Catá: The success of the shy man

‘Frida Kahlo: Making Her Self Up’, the exhibition exploring...

‘Balenciaga: Shaping Fashion’ at V&A, the work and...