Oh God, tonight. Just got back with Juliana and Leon. Tired and drunk still, but want to write.


Fast day: slept ‘til afternoon and then went to the pool with Carlos. Threw a ball around and cooked. Saw neighbour who’s going out with a Spanish X-Factor finalist – apparently I met him last night. Plan was for all of us to go to the football. Spain v. Greece. Sun faded and the drinks started and the excitement built.

Already qualified for the semis but tension still huge. On way to the big screen in Plaza de Colón, carried on a river of red. Carlos and Victor insisted I flew the flag, quite literally, tying a red-yellow cape around my neck. Juliana kept throwing it over my head. Closer to the plaza I realised crazy outfits par for the course: novelty hats, flags, shiny red suits and banners. People singing, spilling their beer in the streets. 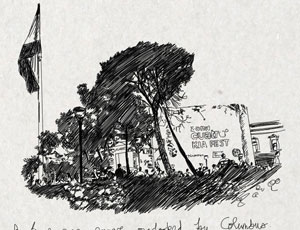 Arrived to a green square overlooked by Columbus. People everywhere and policía all around. We hid our bottles from them, cheered, chanted. Things got darker and the colours lit up. Leon took a piss at the side of the road. Juliana called him vándalo.

Spain won. But I didn’t see it. We followed the police round the plaza, covering their blind spot, glugging and swaying and giddy. Carlos was leaning over a bin, retching. We laughed. Drank.

Then Victor was on the phone and there was a crowd. The police holding them back. Juliana throwing our bottles away and Leon very serious, leading me away.

Thought maybe there was a fight but, no, Carlos had fallen down in the street. We all stopped and pressed to the front. His eyelids were fluttering. He was mumbling, rubbing the back of his hand over his forehead.

We tried to help him up but he just lay there. Don’t know how he got so wasted. We panicked a bit, but the fear pulled us together. Juliana held onto my arm. Leon and Victor were crouching on the pavement. I couldn’t follow the conversation but I kept saying, ‘It’s okay, it’s okay,’ and the others nodded at me.

Ambulance came and went with Carlos, Victor and Juliana. We were all asked questions. They asked me about drugs and I only understood enough to say no, no.

Followed to the hospital in a taxi with Leon. He told me he was sorry it had turned into a bad night, like I was somehow detached from everything. I found this remarkable, almost laughed. Like I cared about that! I was part of it; I just wanted to make sure Carlos was okay, like them.

Adriana was at the hospital, white as a sheet, chewing ears. I was wary of her but she hugged me. Then she started talking to Juliana. She was supportive, concerned, motherly: all her anger and resentment forgotten, the coldness gone. Funny how crisis does that. There was more talk of drugs but we all said we were clean. Had Carlos drunk more than the rest of us? Don’t know. Not sure what he was drinking. Realised my head hurt in the bright hospital light. The room was spinning; I guess I’d had more than I’d thought.

I’m in bed now. Carlos was out cold, but he’ll be okay. Doctors keeping him in for the night, just in case. Adriana and Victor with him at the hospital.

Still wired, even after writing this. Head hurts.

Not sure I can sleep, though I’m sure he’s fine.

Thinking how fast we come to care about each other, even when we can’t communicate verbally. I guess a smile is a smile, happiness is happiness, pain is pain: wordless cry or twisted face. Friends are friends. Like people are people.

Legends of Fire by Seth Insua