UK-based choreographer Carlos Pons Guerra is from Gran Canaria, Spain. In ‘Ham and Passion’ he has choreographed an evening of seductive, provocative and emphatically Spanish contemporary dance theatre that will subvert the senses. This gender-bending night explores the history of homosexuality in 20th century Spain, as well as commenting on current notions of gender and sexual identity. Kitschy, filmic and darkly comical, DeNada Dance Theatre’s first triple bill promises to be an evening of luscious, thought-provoking entertainment- a feast of meaty and greasy dance soaked in a salsa of passion.

We are very excited about touring Ham and Passion, a show we hope will entertain and provoke reflection on current issues surrounding gender and sexual identity, sharing our own particular view of our Hispanic heritage.

The triple bill opens with ‘Passionaria’, a fantasia of ham and sequins. Set to Manuel de Falla’s haunting score for ‘El Amor Brujo’, it is a story of exorcism happening backstage in a dingy cabaret of Civil War Barcelona, where a drag artiste has just murdered her abusive fascist lover.

Next up is ‘Young Man!‘.This tale of ham and passion is inspired by Roland Petit’s ballet, Le Jeune Homme et la Mort, and is a duel of seduction that puts the figure of the Spanish macho to the test, delving into the fatality of innate passions.

Completing the triple bill is ‘O Maria’, a divine comedy of ham and bondage set in a stifling kitchen of 1950’s Seville, where a divine apparition unleashes a torrent of unquenchable desires for a religious woman with a feeding fetish and her tightly bound husband. 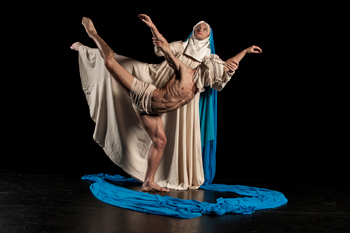 These three explosive period pieces will excite adult audiences of all backgrounds.

Ham and Passion Tour 2015-2016 is funded by Arts Council England and Cervantes Institute (a worldwide organisation for the promotion of Hispanic language and culture) and supported by Northern School of Contemporary Dance, Yorkshire Dance, DanceXchange, Theatre in the Mill, Ovalhouse Theatre, Pink Fringe and Spin Arts Management.

Pons Guerra said: “We are very excited about touring Ham and Passion, a show we hope will entertain and provoke reflection on current issues surrounding gender and sexual identity, sharing our own particular view of our Hispanic heritage. We feel very grateful towards our supporters in the UK- namely Arts Council England, Northern School of Contemporary Dance, Yorkshire Dance and DanceXchange- who have given us invaluable opportunities to develop the work and grow as a company, and hope to reach, delight and move as many audience members with our tour as possible.”.