In celebration of the inauguration of Iberodocs’ second season, we have arranged to meet with one of the festival’s foremost figures and a vital player in making the event a reality: Isabel Moura Mendes. An arts manager with a heritage that is half Cape Verdean, half Portuguese, she is this year’s programme curator for the Lusophone strand of films at the Iberodocs festival.


In celebration of the inauguration of Iberodocs’ second season, we have arranged to meet with one of the festival’s foremost figures and a vital player in making the event a reality: Isabel Moura Mendes. An arts manager with a heritage that is half Cape Verdean, half Portuguese, she is this year’s programme curator for the Lusophone strand of films at the Iberodocs festival.

We meet her at The Filmhouse, one of Scotland’s most emblematic cinemas and one that is characterized by its rejection of ‘the mainstream’ to which we have become accustomed thanks to Hollywood. The Filmhouse is also Iberodocs’ venue of choice in which to unveil its films to the Edinburgh public. We arrive almost at the same time, British punctuality showing through in two Mediterranean women.  The first comment on Mendes’ lips is about the frenzied schedule she has been toiling to over the last few days; the tiredness is reflected in her face, but as soon as we start talking about Iberodocs, she lights up. There is no hesitation and she is full of energy and conviction.

Through Iberodocs we want people to understand who we are, to accept and understand our culture. Instances of intolerance, such as the religious fundamentalism we saw in the tragedy of Charlie Hebdo in France, political parties like UKIP and so many other examples, are born out of fear and ignorance.

Isabel began her professional career as a journalist in Portugal, but as she herself points out, she was asked the question ‘what do you want to be when you grown up?’ when she was still too young to know the answer. ‘Some people are lucky enough to know from a very young age what their vocation is. Others, the majority, need to discover it gradually through trial and error,’ she affirms. However, the arts are nothing new for her; she always knew that she needed art just as she needed ‘to eat, breathe, or sleep’. Her love of cinema and her passion for English are intertwined in her memory. As a little girl she would cut out pieces of paper and cover the television screen with them: she and her sister had stubbornly decided to learn English, and since Lusophone countries do not dub films, but subtitle them, this was an innovative way to do it. Perhaps it was then that her fascination for the seventh art was born. She speaks English almost like a native.

In Portugal, whilst still working as a journalist, she began working for a documentary producer. In 2007, she travelled to the United States, where she became an Arts Manager. In 2010 she came to Edinburgh to study for a Masters in Cultural Management at Queen Margaret University. Today she finds herself completely integrated into the Scottish arts circuit. ‘Throughout my life, my idea of who I am has been in constant flux. In the States I was somebody different to the journalist I was in Portugal; different, too, to the student I was five years ago when I had just arrived in this city, and to the woman I am today.’

Her experiences have moulded her over time not just on the inside, but also in the eyes of others. The search for self-knowledge is a common denominator of human experience, and this is why ‘identity’ has been chosen as the unifying theme of the films in the festival.  ‘Through Iberodocs we want people to understand who we are, to accept and understand our culture. Instances of intolerance, such as the religious fundamentalism we saw in the tragedy of Charlie Hebdo in France, political parties like UKIP and so many other examples, are born out of fear and ignorance’, she comments. ‘We want to create a conversation in which cinema can be the medium and the channel for engaging with these issues,’ she adds. 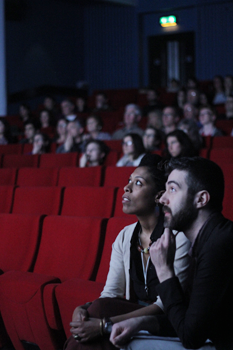 The Portuguese community in Scotland, although smaller than the Spanish one, is growing steadily. What is more, Lusophone countries have much to offer the cinematic industry. In a European context, Portuguese cinema has some unique characteristics: often compared with Asian cinema, it employs a language that invites reflection. This may well be a projection of the character of the country itself, a sort of a destiny, that lyrically expresses the sorrows of life. ‘There is more to Portuguese people than melancholy, but they do have an element of that.’

Brazil will also enjoy an important presence in the festival. Two of the films that will be shown centre on the figure of Sebastiaõ Salgado, namely Meeting Sebastiaõ Salgado and The Salt of the Earth by the acclaimed Wim Wenders. Also in the programme is Favela Gay, one of Mendes’ favourites. ‘I think the film perfectly captures the idea of identity. It unpicks how a minority group with a certain sexual orientation survives in this oppressive space, the favelas of Rio de Janeiro.’ To which she adds, ‘I think it’s going to make a big impact on the audience: nobody will leave the cinema indifferent’. Following the screening there will be an after party at the cocktail bar Boteco do Brazil with Carlos Eduardo Valinoti, producer of the film and one of the guests of honour, who will speak directly to the public. ‘This is a unique opportunity, being able to enter into dialogue with the filmmakers in person. I would love it if we could do that with each one of the films we screen.’

In answer to the question, what is she most keen to see?, Mendes has no doubt: Alentejo, Alentejo is the one she’s most hotly anticipating. The film’s director, Sergio Tréfault, is one of the most well-known filmmakers in Portugal. In this film he explores the Portuguese region of Alentejo along with its idiosyncrasies and traditions. ‘I’m curious to see the reaction of the public, to overhear their comments as they leave. It has been received very well in Portugal, so I’m keen to see how it fares here.’

I would love it if members of the public chose one or two films, if they watched them in the cinema and lingered afterwards to talk about what they have seen, to talk about identity”.

The star attraction will be courtesy of Catarina Mourāo, one of the most prestigious documentary makers on the European scene. Together with Catarina Alves Costa, she is the founder of Laranja Azul, an independent creative documentary production company in Lisbon. Catarina will be leading a 45 minute master class at Edinburgh university on Friday 15th May at 2pm. What’s more, we will be treated to a retrospective showcase of three of her films, My Village Doesn’t Live Here Anymore, Through the Shadows and The Wolf’s Lair. ‘It’s an honour to be able to have someone like Catarina at the second season of Iberodocs. Without a doubt, it will be one of the most special moments of the festival,’ says Mendes. Her hope, she explains, is that an audience member from Edinburgh, Scotland or the UK will end up sitting next to someone from Spain, Portugal, or Latin America. ‘If that happens, then half the battle will be won,’ she says, adding that ‘if they then come along to the after parties, which are also part of our culture since we like to celebrate, then I think our efforts to break down the barriers between cultural stereotypes will have an enormous impact.’

She concludes, ‘I know that today’s society is characterised by a lack of time, but I would love it if members of the public chose one or two films, if they watched them in the cinema and lingered afterwards to talk about what they have seen, to talk about identity, to enjoy a pint with us, to make any suggestions… we have worked very hard to drive this project forwards and there is a lot of love behind what we do. I hope the public will be able to see that and enjoy the fruits of our labours.’