I spent last week in the Highlands. Our first stop was Mull; the island, inhospitable, even in the middle of August, it only has one way roads. This way the voyage turns into a slow pilgrimage, in which we must stop every few minutes to yield the way, every time we do so, we say hello to the drivers we come across, remembering those old habits we used to have when the conversation with other walkers was part of the journey. That greeting is a sign that life here flows slowly, that it has come to a halt in a moment that we will never belong to.

Still images of a rough sea, a mountain that fails to exist in the middle of the mist, and in the center of these never ending scenes, small figures that move around accustomed to inhabit the abysm. Shellfish gatherers, barnacle gatherers, sailors.

The sublime belongs to the highlands in spite of the tourists. The scale exceeds us; the hugeness turns us into tiny little ants that move around without making too much sense. And I, in my car, as a ridiculous part of this never ending puzzle, couldn’t help remembering my origin; that small piece of land at the northwest of the Iberian Peninsula, tiny on a world map, but bearer of the eternity that also resides in the high lands.

In “A Costa da Morte” the sea makes us aware of our lightness, a boat sailing on this part of the Atlantic sea turns us into puppets at mercy of the waves, maybe nothing depends on us. 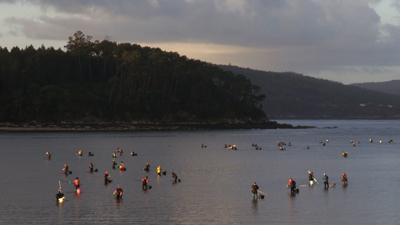 Lois Patiño knew how to represent this in “A Costa da Morte”. Still images of a rough sea, a mountain that fails to exist in the middle of the mist, and in the center of these never ending scenes, small figures that move around accustomed to inhabit the abysm. Shellfish gatherers, barnacle gatherers, sailors. Heroes aware of human insignificance. But their small size makes a contrast with the power of their voices. Patiño makes us part of these sounds, she gets us close to its whispers, to its sighs, to its conversations, the day-to-day still exists and is always the same, repeating itself like a constant echo throughout the centuries.

“A Costa da Morte” reached Edinburgh the 25th of July, Galician Day. It was by the hand of the Iberodrocs, the Iberoamerican documentary film festival in Scotland, and thanks to the effort of one of its directors, Galician, Xosé Ramón Rivas. Patiño’s work was projected in the Filmhouse to show this part of the Atlantic that we all miss so much. The hall was filled with Galician and Scotish people, we might have more in common that we could have ever imagined.

Ana is a Galician who worked for five years in the CGAC (Galician Centre of Contemporary Art) and has contributed with several art magazines. In 2010 she moved to Edinburgh where she is studing a master's degree in Contemporary Art and has also curated many exhibitions. Since 2013 she manages the gallery Interview Room 11 in colaboration with Mirja Koponen and she promotes intensely Spanish artist in the capital city of Scotland.

Don Quixote at the Royal Ballet