This summer, the National Gallery, as part of its Spanish season, will show a select number of works by Bartolomé Bermejo (about 1440–about 1501), one of Spain’s most innovative and accomplished painters active in the second half of the 15th century.

“The National Gallery’s ‘Saint Michael Triumphant’ is a supreme work of European 15th-century painting. The exhibition introduces the public to Bermejo, a great Spanish Renaissance master with exceptional loans never seen before in Britain.

Bartolomé de Cárdenas was more commonly known as ‘Bermejo’ – meaning ‘reddish’ in Spanish – probably referring to a distinctive physical feature such as red hair or a ruddy complexion. He was born in Cordoba but was principally active in the Crown of Aragon, working in Tous, Valencia, Daroca, Zaragoza, and Barcelona. He led an itinerant life, partnering with local artists to access painters’ guilds and obtain religious commissions in the cities he visited. Bermejo’s personal circumstances remain enigmatic, and very little is known about his life and early training but it seems likely that he was a converso (a Jew converted to Christianity) and that his nomadic career might be partially explained by the establishment of the Inquisition and persecution of Jews by the religious authorities. 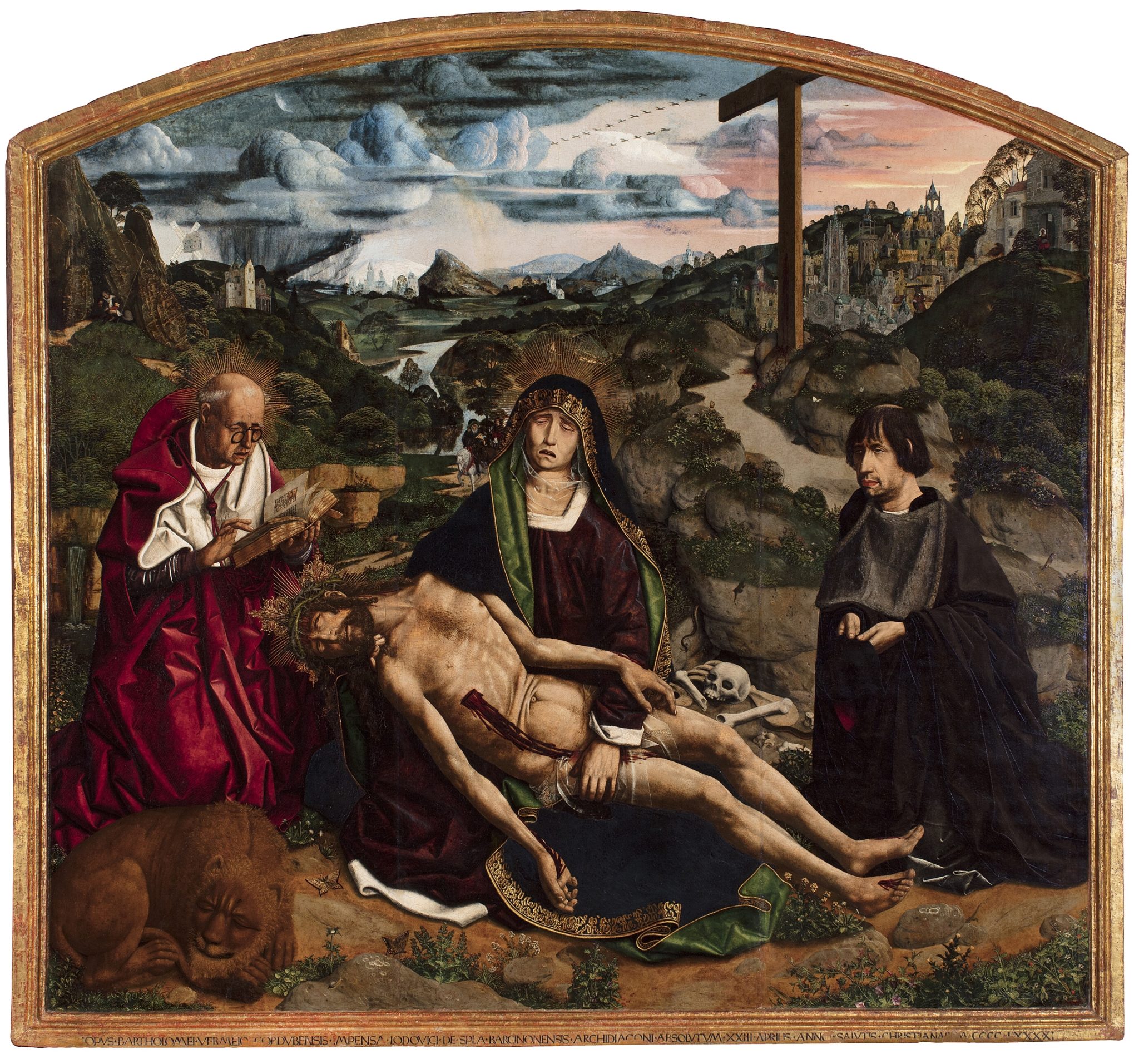 The exhibition will include six loans that have never been seen outside of Spain, including two of Bermejo’s masterpieces: ‘Triptych of the Virgin of Montserrat’ (probably 1470–75), painted for the Italian cloth merchant Francesco della Chiesa, from the Cattedrale Nostra Signora Assunta in Acqui Terme, Alessandria (Italy), and the recently restored ‘Desplà Pietà’ (1490), named after the man who commissioned the work – Lluís Desplà, archdeacon of Barcelona Cathedral, where the painting has been since the 15th century.

In addition, four panels depicting scenes from Christ the Redeemer (‘Descent of Christ into Limbo’ and ‘Resurrection’ from Museu Nacional d’Art de Catalunya (MNAC), Barcelona; ‘Christ entering Paradise’ and ‘Ascension’ from the Fundació Institut Amatller d’Art Hispànic, Barcelona, all about 1470–5) will be displayed.

At the centre of the exhibition will be the National Gallery’s own painting by Bermejo, Saint Michael Triumphant over the Devil with the Donor Antoni Joan (1468). Widely considered the most important early Spanish painting in Britain, it is displayed here for the first time following its recent conservation. The year-long treatment has considerably improved the legibility of the painting, revealing a strong sense of three-dimensionality in the figures and an astonishingly convincing representation of different textures such as the sheen of the fire-gilded armour the archangel wears, with its reflection of the city of Jerusalem on its breastplate, or the minutely described monster at his feet and carefully observed plants dotted around the landscape. The recent scientific examination of the painting has brought to light new information regarding Bermejo’s painting technique.

“Given that so few pictures by Bermejo are known, we are very fortunate to have one of his great masterpieces in the National Gallery. In displaying our painting for the first time alongside Bermejo’s ‘Triptych of the Virgin of Montserrat’ and the ‘Desplà Pietà’ – neither of which have ever travelled to Britain before – I hope visitors to the exhibition will be dazzled by the sheer beauty and uniqueness of Bermejo’s paintings.”

Painted in 1468, the ‘Saint Michael Triumphant’ is thought to have once formed part of an altarpiece dedicated to Saint Michael in the church of the same name in Tous, near Valencia. It is the first of some twenty known works by Bermejo, produced over a career spanning just over thirty years. The first surviving document relating to the artist, in the form of a receipt for partial payment for the ‘Saint Michael Triumphant’, will be brought alongside the painting for the very first time in this exhibition. 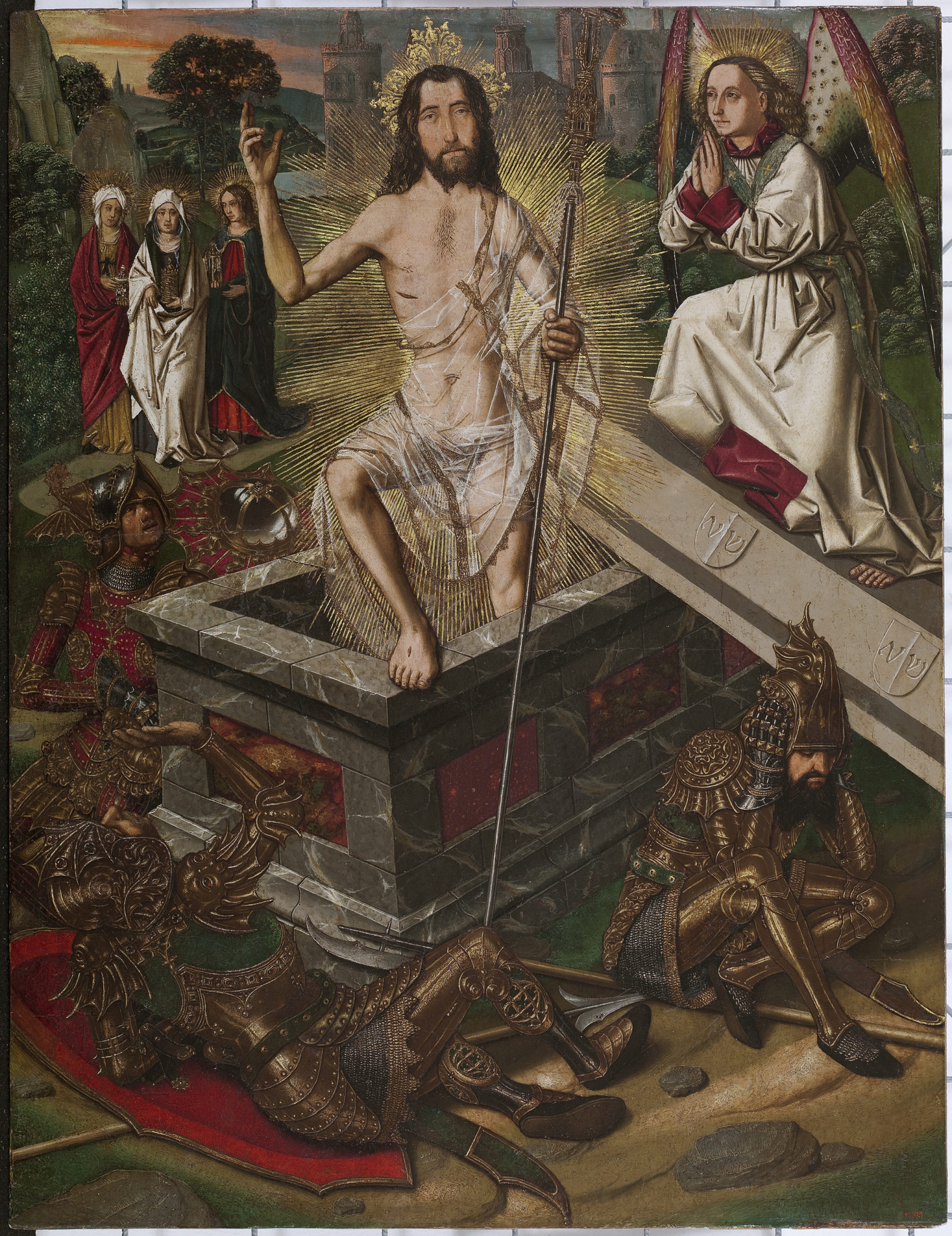 The painting shows an elegant and elongated archangel Michael enveloped in a sumptuous embroidered, jewel-encrusted cape defeating the devil, depicted in the form of a grotesque hybrid monster. Antoni Joan, lord of Tous and the donor who commissioned the work, kneels at the archangel’s feet and looks up from his prayer book to witness Saint Michael’s victory over the devil.

The works on display demonstrate Bermejo’s technical virtuosity and mastery of the oil painting technique; unparalleled among his Spanish contemporaries. Previously thought to have trained in the Netherlands, though no such journey is documented, Bermejo is more likely to have learnt how to paint in oil through close observation of Netherlandish paintings circulating in Spain. It is this technical skill, combined with his inventiveness that sets Bermejo apart as one of the great masters of the Spanish Renaissance.

The catalogue accompanying this exhibition will focus on ‘Saint Michael Triumphant’, discussing the painting in the broader context of Bermejo’s life and career, and it will also include a detailed description of the painting’s recent conservation treatment and scientific examination, publishing technical images for the very first time.

Rosana Antolí, ‘The Resistance Island’ at The Ryder