First Edinburgh Integra Music Festival, more than six hours of live music for one day, the 11th of December at Teviot Row House in the capital of Scotland.


Vamos Scotland works to promote creativity in all its forms and focuses its energy on projects which have a positive cultural and social impact. At this time they are organizing the First Edinburgh Integra Music Festival with more than six hours of live music for one day, the 11th of December at Teviot Row House in the capital of Scotland. The aim of this festival (apart from an excuse to have fun and enjoy live music) is to connect cultures through the most important and universal language: MUSIC!

Spain meets Scotland! In the Spanish corner Triangulo de Amor Bizzarro, one of the most influential bands of the Spanish indie scene right now; in the Scottish corner the sharp punk-rock of the locals Snide Rhythms. And to complete a stunning night, the groove of the popular Greek DJ Set-Le Vangelis will make us dance until late.

TRIANGULO DE AMOR BIZARRO
Formed in 2007 in the rainy north-western region of Spain known as Galicia, the band’s first self-titled album brilliantly captured the attention of the public and the press at the same time. Within a few months, they went from obscurity to appearing in virtually every festival organized in Spain (i.e. FIB 2014), Portugal and Latin America, sharing stage with bands like Pixies or Interpol. Rolling Stone magazine included them in the 10 most impressionable groups of the Spanish rock scene. At the 2011 Independent Music Awards they received 9 nominations and won several top awards (Spanish Artist, Album of the Year, Rock Album, and Live). 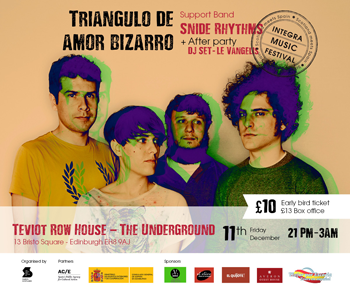 In 2013 Triangulo de Amor Bizarro were chosen by My Bloody Valentine as their support band in Mexico. Last summer the band toured the USA for the first time (Chicago, L.A, NYC…). To end a perfect year and just before the release of their fourth album in January, the band will play for the first time in UK next December in an exclusive show at Integra Music Festival in Edinburgh.

SNIDE RHYTHMS
The noisy Edinburgh trio interrupted the Scottish music scene a few years ago and they are the ideal cover for the Spanish band. As they say themselves, Snide Rhythms come from the mind-your-language school of thought. They were born at night – but not last night. Once described as ‘humble/arrogant’, Snide Rhythms want you to believe in yourself.