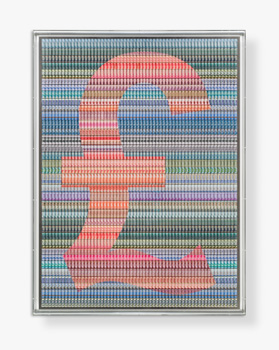 Combining the pop vocabulary of Warhol and a multitude of international banknotes, Montoya uses the world’s leading currencies as his aesthetic arena.

‘Aristotle would be amazed. Santiago made something out of nothing – because he turned a bill of exchange into an object of art,’ Miguel Palacios, Professor of Finance, Vanderbilt University.

Montoya began working with currency as his medium of choice in 2007 – viewing paper currency as ready-made works of art, Montoya set about cutting, stretching and altering the bills to push the boundaries of art in both a new and unexpected way. Montoya reinterprets paper currency as both a canvas as well as a raw material, exploring the added value beyond its very surface.

The aesthetic aspect of the artwork is created by manipulating multiple international currencies and their patterns to create an original visual language. Having only previously worked with the dollar motif, an iconic symbol of capitalist desire, Montoya now introduces currencies such as the pound, yuan, rupee and euro. The use of these bank notes alongside cliché titles add an element of humour to Montoya’s works, ensuring the often complex subject matter is more accessible and encouraging lively conversation and debate.

By transforming the currency in a defamiliarising way, Montoya explores the multifaceted and multi-layered economic system. With the infinite repetition of the bills, a sense of both wonder and anguish arises which also reflects the emotions relating to the frailty and limited understanding of the financial system. Montoya expands upon monetary ethics and in doing so, highlights capitalism’s global force.

Montoya’s use of money as an artistic medium, also opens a dialogue on the void between state propaganda and reality itself. A plethora of national ideas and socio-political ideologies are embedded in banknotes through their design and iconography and by bringing these scenes to the forefront, Montoya raises questions about systems of value and how they shape individuals and nations. 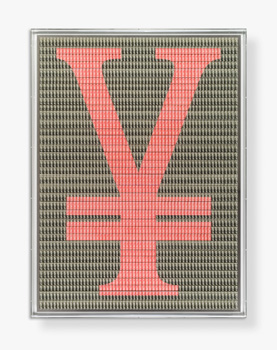 ABOUT THE ARTIST
Contemporary Colombian artist Santiago Montoya (b. 1974) follows a multidisciplinary approach that embraces traditional painting, found objects and video documentary. In a carefully structured series, he uses the aesthetics of materials to introduce meaning, resulting in collections where appearance and concept bear equal weight. He comments on a broad swathe of political issues, from conservation and dispossession to the transmission of information, aiming to uncover reality and bring to light the victory of the human spirit over adversity.

Awarded a Master of Fine Arts degree at the Universidad de Los Andes, Bogotá, in 2006 Montoya was shortlisted for the IV Uniandinos (Alumni Association of the University of Los Andes) Arts Prize. He has exhibited internationally, in group shows which include Inner Journeys at Maison Particulière in Brussels (2013) and Conscienta: Latin American Consciousness at the Lloyds Club in London (2014). His first solo exhibition in London, The Great Swindle, opened in November in 2012 at the Halcyon Gallery and was followed by The Horizon Series and The New Dollar Sign works. Recent collections include Museum of Fine Arts Boston (MFA) in 2015 whilst The AMA (Museum of the Americas – OCAS) in Washington D.C will be hosting a major solo show – titled THE GREAT SWINDLE, curated by Pr. Jose Luis Falconi from October 2016 – January 2017.