The Total Refreshment Centre presents new body of work by the London based artist Gala Knörr for her first solo exhibition in the UK. The old Edwardian building that was once a sugar factory then a Jamaican social club has since 2012 been the home for producers, musicians and artists to promote their creative endeavors. Regularly opening its doors to creative entities for new collaborations, be it in the form of recordings, film, concerts or exhibition, the Total Refreshment Centre has always pushed the art it stands for.

WTF is a project initiated by Gala Knörr during her artist residency at Cité Internationale des Arts in Paris at the beginning of the year, and the continuation of her research in her studio in East London, through which she has been exploring the different ways people can communicate with each other inspired by her interaction with strangers and friends strictly through the online spectacle, particularly the app Snapchat. Knörr’s curiosity was drawn to Snapchat’s ephemeral nature but fooled its users by screen capturing her favourite moments sent by people, always aware that the app notified each user of each screen capture. WTF aims to be an investigative project into the psyche of contemporary society and the ways we relate to each other, how we seek to be constantly liked and find meaning in fictitious relationships with strangers. The parallel nature of our In Real Life self, our experiencing life and our remembering life. 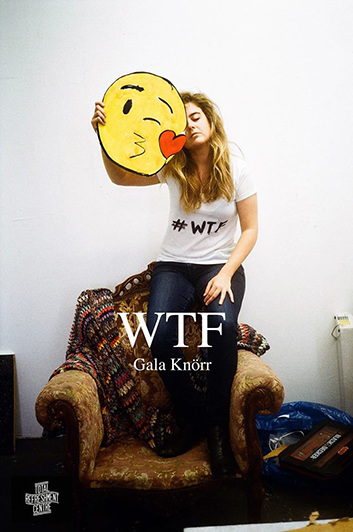 ‘…She explores the role of photography in pop culture, and its narrative effect of timebound and timelessness. Given that our social context has dramatically shifted since the 90’s with the introduction of technology, her practice of producing paintings based on sourced snaps poses a complicated and interesting conversation around our increasingly complex and layered social stratosphere. Historically, paintings are both time bound and associated with ‘timeless.’ They are also a field of social relations. Snapchat proposes to be timelimited, therefore forever private, but through these paintings the image become memorialized and public, allowing the viewer reflection into the nature of our world as ever increasing tension between public and private space.’ -Jamie Grace Davis, Visiting Artist at École Nationale d’Arts de Paris Cergy 2015

Gala Knörr’s first solo UK exhibition will be part of the Spain NOW! 2015, the 7th Season of Contemporary Art and Culture from Spain.

Info and pictures © Courtesy of the artist / Gala Knörr
http://www.galaknorr.com