Copperfield gallery in London announces the first UK solo exhibition of Marco Godoy (b. 1986 Madrid) which follows his Royal College of Art MA (2014) and subsequent inclusion in group exhibitions at Palais de Tokyo and Centre Pompidou.


Copperfield gallery in London announces the first UK solo exhibition of Marco Godoy (b. 1986 Madrid) which follows his Royal College of Art MA (2014) and subsequent inclusion in group exhibitions at Palais de Tokyo and Centre Pompidou.

Focusing on the visual and symbolic relationships between authority and power, Godoy analyses the social and political ramifications of the real and fictional divides that make up the European Union (EU). Mixing photography, sculpture, installation, and performance the exhibition frustrates any fixed conception of borders, both physical and symbolic.

Presenting the EU’s borders as constructions, Godoy’s work illustrates the peculiarity of differences in basic legal rights such as minimum wage that change from one country to another. As the EU permits citizens to cross national borders freely to work, the absurdity of this situation becomes apparent when confronted with the full spectrum of wages in ‘An Hour of Your Time’. It is not hard to see the motivating factor here; in 2016, hourly minimum wages across the EU varied widely from €1.28 in Bulgaria to €11.10 in Luxembourg. 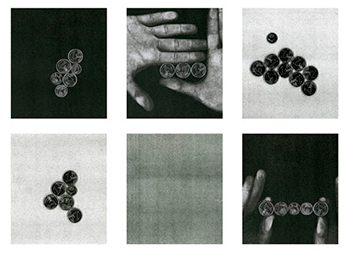 An hour of your time – understudy (2016), print on paper, dimensions variable

In other work, attention is drawn to the way in which the actual geographical divide shields those in the United Kingdom (UK) from the full effects of issues such as the current refugee crisis. With the recent influx of migrants, the EU has been divided over how best to deal with the resettling of those in search of asylum. Though these tensions have been widely felt all over Europe, there remains a degree of detachment in the UK, which according to the BBC has received a mere 60 asylum applications for every 100,000 residents.  A new installation constructed from modified heaters attempts to bring some of the immediacy and discomfort of the situation in places like Calais into the gallery. The noise, glow and heat of these installations pervades the entire space. The domestic is broken here; the electrified cables simultaneously alluring and threatening.

“It is impossible to convey the full reality of these situations but at a time where we have the biggest wave of migrants since WWII, I wanted to translate some of that physicality into the exhibition space – discomfort and a very real threat if a certain line is crossed” – Godoy

Conceived well in advance of the announcement of the UK’s EU referendum, Godoy’s considerations of the realities and fictions that constrain Europe and its citizens provide a dual perspective from an artist who lives and works between Spain and England.

In The Raw’, an art exhibition from the Clandestinos collective

‘Pepe Mujica, Lessons from the Flowerbed’ by Heidi Specogna at IberoDocs 2016