Since the beginning of this month we have a great exhibition at Victoria Miro Gallery in London, a show comprising paintings and an installation of lamps by the Mexico-based Cuban-American artist Jorge Pardo.

Celebrated for his use of vibrant colours, eclectic patterns and natural and industrial materials, Pardo, a MacArthur Fellow, has since the 1990s drawn on the historical intersections of fine art, architecture and design to create a highly individual body of work. Characterised by its fluidity between genres, his diverse output ranges from paintings, sculptures and murals to furniture and even entire buildings. Pardo’s focus on multiple meanings, purposes and contexts invites constant re-evaluation of objects, images and architectural space. 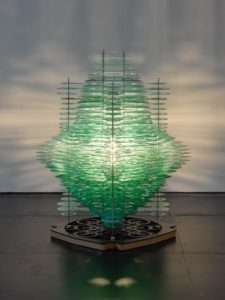 The exhibition features suspended and freestanding lamps, ranging in scale from one to 1.7 metres tall, distributed at varying distances from one another throughout the first-floor gallery. Distinguishable by a number of components and forms – including sinuous lines of laser-cut PETG plastic resin that surround a central light fitting, and lengths of the same material, sometimes perforated with rectangular or triangular motifs, that hang in fringed formations – Pardo’s lamps offer an extended consideration of physicality and immateriality, the visible and invisible. While the lamps themselves possess sculptural form as objects, sometimes recalling natural phenomena such as animal and plant life, the light they emit, variously controlled and directed, is less tangible. This is experienced in the spaces between each work and the surrounding architecture – an irregular play of light and shadow which itself might be altered by viewer’s movements through the space.

In addition, new paintings, ranging from two metres to almost five metres in height, are installed in the ground floor gallery and in the atrium space that connects the gallery floors. While they are called paintings, these wall-mounted works are composed of layers of laser-cut birch wood ply and MDF, milled, perforated and painted so that evocations – of colour, form and image – seem to shift and dissolve as the viewer moves in front of them. Ostensibly completed in single colours – red, orange, yellow and blue – up close the works reveal tesseraelike surfaces of complementary and tertiary hues. These interact with the routed circular and linear motifs, topographical in appearance, of the layers underneath to create moiré-like patterns of interference, through which suggestions of landscape and weather are revealed.

The forms of the paintings themselves recall folding screens installed on their sides and bolted to the wall (and thus robbed of their function), though the impression of the hinged panels projecting into space is another illusion. Rather than concertina into space, the works are resolutely flat.

Poised between the organic and the manmade, the practical and the poetic, Pardo’s art playfully insists that form needn’t necessarily follow function (or vice versa) instead suggesting multiple and mutating definitions and applications that toy with our expectations. Together, the works in the exhibition expand upon the artist’s ongoing exploration into questions of composition, classification of genres and categories of production and display.

15th Anniversary of the ‘Flamenco Festival London’ at Sadler’s Wells

The 9th annual JustMAD will take place next week, running from 20 to 25 February.