Saelia Aparicio: Searching for the sublime among strata of waste

A lively Facebook chat with Saelia Aparicio
I type the name Saelia Aparicio into Google, just as you might do the name of a blind date as a safety measure, to make sure they don’t turn out to be a serial killer. The result: a veritable avalanche of information and content.

Born in Ávila in 1982, Aparicio has a fine art degree from the University of Cuenca and has, her CV shows, been creating art non-stop since 2005. The internet brings up, amongst many other things, individual exhibitions, group exhibitions, prizes and grants awarded to her, and criticism of her art.. That last one took me by surprise a little, prompting me to rethink this article – I don’t want to merely repeat the various excellent analyses of the symbolism of her oeuvre, and at any rate, what really interests me is why she made the decision to leave Spain. Hence my first question: why London?

Saelia Aparicio: Well, first of all because I didn’t know the winters would be quite so horrible, and secondly because I had always found the city, and the diversity both of its people and of their cultures, enticing. 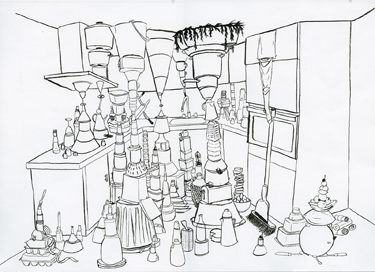 The basic and essential by Saelia Aparicio

Brit Es: Do you think that the ever-discussed weather and this diversity that London has to offer have influenced you as an artist?

SA: Yes, and other aspects of the city too, the pace of life, the British class system, learning to dream in English, having to keep a diary, the transport – I had never lived in a city as big as this before, and at first I was spending two hours pretty much every day just getting from place to place, and finding it so frustrating, an abomination. While I have got used to it now, I still feel that way. But I try to make the most of it, use it as a source of inspiration, so now I’m writing an essay called ‘Commuting’. I want to explore the other aspects of my life here in London some more, and use my reactions to everyday situations as the starting point for more art.

BE: This comes through in your last exhibition at the Royal College of Art, ‘Suggestions of improvement for TfL‘, showing the city from the point of view of someone who has to dodge the potholes every day on your bike. But I’ve got to say actually that what I most enjoy in this series of ink drawings is when everyday locations like zebra crossings are the gateway to a subterranean world. Is that your interpretation of the British class system?

SA: No, this series was about taking certain social norms, conventions, and developing others out of them, new ones just as awkward, but more absurd, and more artistic. In London, you’re always having to criss-cross the city, to get to and from college I’ve got a round trip of 24km every day, and I took my inspiration from my encounters with traffic lights, potholes, drivers – some polite, some less so – impromptu races with other cyclists, and so on.

I actually do have two projects I’m working on involving the class system. It really struck me how here, people paint and repaint the walls of their houses without taking off the previous coat, so I had this theory that well with all these layers of paints, the English might just be heading back to the caves, because their rooms are going to just end up rounded off like caves. And then the other is about all the random bits of rubbish you see in the street. I’m going to classify these by material, group these together, and then subject them to high temperatures and high pressure, like when rock formations are created with their different strata, and I will call my rocky creation Londonite. 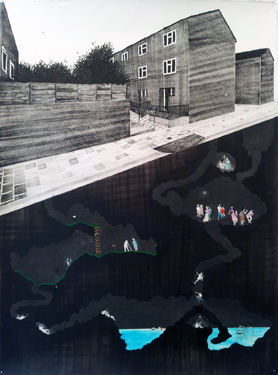 Among the things Billy Pilgrim could not change… by Saelia Aparicio

BE: In ‘The basic and essential‘ you reflect on Diogenes syndrome in its final stages. The characters in the Londonite series, will they all be extreme hoarders?

SA: Haha, well I’d never thought about it, but that’s a good idea. Actually, in reality I think that we’ve all got a bit of hoarder in us. When we eliminate the space between objects, we also eliminate order and, with it, the existence of categories. This turns everything into rubbish. ‘Lo básico e imprescendible’ (The basic and essential) was about a play on words, on concepts, about how to make waste, the offshoot of our ever-growing materialism, into something sublime.

BE: In one of the pieces in your ‘Entre las cosas que Billy Pilgrim no podia cambiar’(Among the things Billy Pilgrim could not change…)underground worlds appear again. I hope you’ll excuse me for coming back to this, but I find it fascinating, intriguing: can you tell us more about these subterranean societies?

SA: In these worlds I’m imagining neighbours who have a normal life by day, and then at night dig underground lairs, and use them to have a dark, parallel life, based on sharing and communal activity. I laughed a lot over this piece because it contrasts so much with my life here, where it’s rare to so much as smile at a neighbour.

BE: Well I think we’ve done well here, no? Unless you have any more you wanted to talk about.

SA: Well, I had been thinking about talking about London as a lasagne, or a cushion made of pieces of multi-coloured foam but yes, perhaps we should leave it there.

If you want to find out more about the work of Saelia Aparicio, visit her blog – or simply type her name into your preferred search engine.

Sales Director (London) & Writer. When he was eight years old, his father brought him back a gift from a trip to Canada: a tape with all of the current chart hits on it. Amongst them was "I Feel Love" by Donna Summer and after that nothing was the same again! He has lost two record collections in his life, the most recent of which was ruined in a flood in his friend's basement in Homerton. He is a music fan but is not completely obsessed; he manages to keep his melomania at a level that allows him to live a normal life. We hope you enjoy reading his articles.

All the World’s a Stage: Jorge de Juan and the biggest Spanish theatre project outside Spain