Calderón de la Barca would would be amazed if he knew that in 2016, almost four centuries after writing ‘Life’s a dream’, two women were salvaging his work in order to perform it in London as part of the Women and War Festival: a festival which brings together the voices of women who made history in wars around the world. It is the history from below of the women who were so often silenced by a hegemonic narrative of events governed by masculine voices and images.

‘Life’s a dream’, which was first performed in 1635, is a narrative governed by men, with revolutionary characters and metaphors about life in the darkness, life spent in a cave, without light and without education; the life of the beast who “saves” society and its people when he discovers the world through his own understanding. The work is a demonstration of the struggle against oppressive forces like fate, omens and prejudices. But in this story, when adapted and interpreted by Paula Rodríguez and Sandra Arpa, the transformative focus is give to woman: ‘Rosaura’. 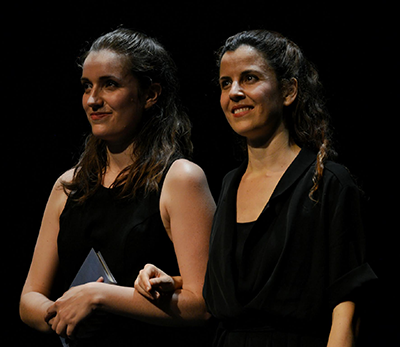 In terms of its staging, this is a revolutionary adaptation, with such minimalism that it puts the expressive power of its artistic aims to test. It is a piece full of ingenuity that raises the same questions for its audience that Calderón was already tackling four hundred years ago and that are still of critical importance in a society like ours. With nods to Brexit, to mass media and to untruthful references which are all treated with a touch of intelligent and universal humour the play achieves its success; a humour that captivates and leaves no room for indifference. Drama, humour and intellect are conveyed by two actors who carry the performance with the dignity of someone who knows how to recover the wisdom and legacy of a classic like Calderón.

The challenge was not easy: to take a classic and make it relevant, contemporary and appealing and moreover, to do this with a creative vision that only required the basics, a bare stage, two actors, a lamp and sound effects to bring it to life. It is clear from this alone, that from that point on, it was not going to be a simple project.

For that reason, if we have to pick out one of this project’s merits which stands out above the rest, we would say that it is the audacity and bravery that, like Rosaura, Paula and Sandra embody as brave women/actresses who do not shy away from big challenges. There is an excellent production, well worth seeing, unmissable and unforgettable.

What is life? A frenzy.
What is life? An illusion,
a shadow, a fiction,
and the greatest good’s but little,
this life is but a dream,
and dreams, are dreams.

Translated b
y Stephanie Back.

Vice Principal at Brit Es.Sociologist and Phd in Art. She has been mediator, teacher and supervisor of programs of educational and artistic self-management in countries such as Senegal, Angola, Venezuela and Guatemala through various AECID scholarships. Her practice is based on a strategy that articulates the education as the core of personal and main development engine of social change. After finishing her studies in Sociology at UPSAM, she shaped as a technician of fine arts and design in the Applied Arts of the Sculpture, in the school of La Palma (Madrid) and she complements her studies around three lines: Education, New Technologiesa and Contemporary Creation, for it reconciles her activity of artistic mediation in PENSART, also working into management team in nathional organization MAV (Visual Artist Women). She lives and works in London.

Outstanding posting although I happened to be willing to know if you could potentially compose a litte more about this subject?
I’d be really grateful if you might elaborate a bit further.
Cheers!

Thanks, if you can read in spanish, we have a review at:
http://www.brit-es.com/paula-rodriguez-y-sandra-arpa-rescantan-con-rosaura

Also you can find more info about the project at:
http://www.womenandwar.co.uk/rosaura
http://www.teatroinverso.wixsite.com/proyectorosaura